Clinton had spent five nights in the California hospital due to a urological infection. He will return to New York to finish antibiotic treatment, a spokesman said. 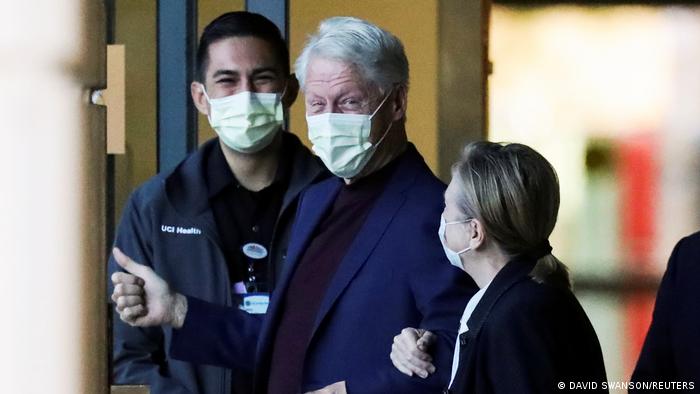 Former US President Bill Clinton was released from a hospital in California on Sunday after he was admitted last week due to a urological infection.

Clinton left the hospital with his wife, former Secretary of State Hillary Clinton, at around 8 a.m. local time. He gave a thumbs-up to a journalist who asked him how he was feeling.

UC Irvine doctor Alpesh Amin, who was overseeing Clinton's treatment, said in a statement that the former president's "fever and white blood cell count are normalized."

Clinton will now return home to "finish his course of antibiotics."

"On behalf of everyone at UC Irvine Medical Center, we were honored to have treated him and will continue to monitor his progress," Amin said.

The 75-year-old was admitted to the hospital on Tuesday because he was feeling fatigued. He received an outpouring of support while undergoing treatment, with President Joe Biden speaking to Clinton on Friday.

The New York Times had reported that Clinton was suffering from sepsis, an extreme life-threatening immune response to an infection.

Clinton has history of health scares

Clinton, a member of the Democratic Party, served as president from 1993 to 2001.  He has experienced numerous health scares since leaving office and underwent quadruple bypass surgery in 2004 at the age of 58.

A partially collapsed lung landed Clinton again in the hospital in 2005.  The former president also received stents to clear a blocked artery in 2010.

Clinton has switched to a mostly vegan diet over the last decade to preserve his health.