Former Indian President Pranab Mukherjee dies at 84 | News and current affairs from Germany and around the world | DW | 31.08.2020

The former president of India and long-serving opposition figure has died in hospital following an emergency surgery. Doctors confirmed that Mukherjee also tested positive for COVID-19 before passing away. 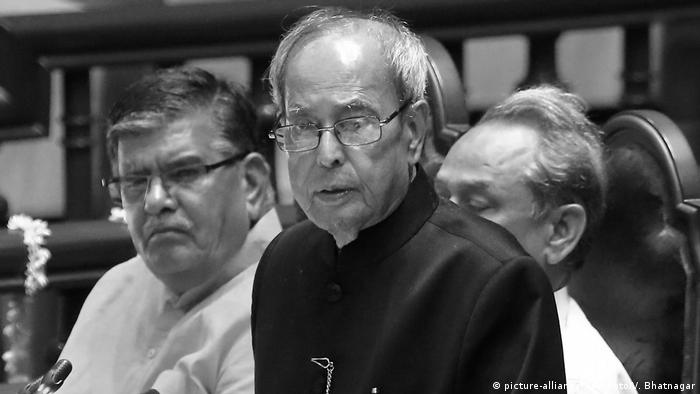 Former Indian President Pranab Mukherjee passed away on Monday at the age of 84, his family announced.

He had been admitted to the Army Research and Referral Hospital in New Delhi on August 10 for emergency surgery on a blood clot in his brain, after which he tested positive for COVID-19, the hospital said said.

The cause of death was given as multiple organ failure.

Mukherjee served as president between 2012 and 2017, a largely ceremonial role in a country where most power lies with the prime minister. Over his five-decade-long career, he was a prominent figure in the opposition Indian National Congress party, and served as defense, foreign and finance minister in several governments as well as serving in former premier Indira Gandhi's Cabinet. Mukherjee, who was born on December 11, 1935 and hailed from the Bengal region, worked as a teacher, lawyer and journalists before turning towards politics. He was known as a skilled negotiator but was was criticized during his stint as finance minister for failing to push through economic liberalization measures.

Indian Prime Minister Narendra Modi, who leads the rival nationalist Bharatiya Janata Party, wrote on Twitter that Mukherjee "left an indelible mark on the development trajectory of our nation. A scholar par excellence, a towering statesman, he was admired across the political spectrum."

Ram Nath Kovind, who succeeded Mukherjee as president, honored his predecessor saying he was "a colossus in public life" who served India "with the spirit of a sage."

India became one of the countries most impacted by coronavirus in the past months with the number of new infections on Sunday breaking the global record for a single-day spike. Part of this rise in infection numbers is down to a country-wide push for increased testing.

The disputed border between the two powerful neighbors has been a site of tension after a violent clash in June left at least 20 soldiers dead. The Indian army did not say whether the latest incident involved casualties.