Sushma Swaraj was one of India's best-known female politicians and stood out with a pioneering, active presence on social media. She served as foreign minister from 2014 until earlier this year. 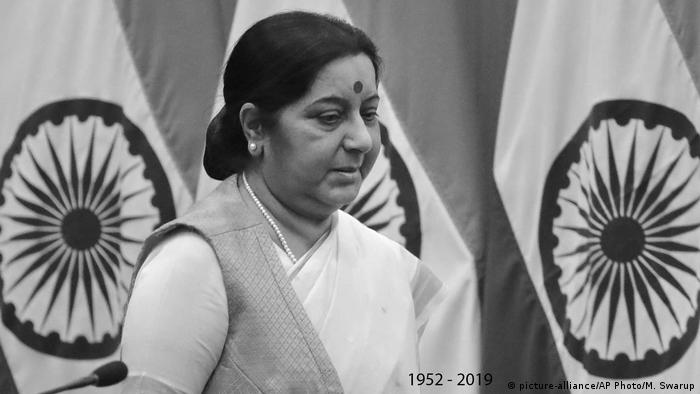 The Press Trust of India reported that Swaraj died of a heart attack after being taken to a hospital in New Delhi.

In a series of tweets, Prime Minister Narendra Modi praised her work as foreign minister and mourned what he called a "personal loss."

"A glorious chapter in Indian politics comes to an end," Modi wrote. "India grieves the demise of a remarkable leader who devoted her life to public service and bettering lives of the poor."

Swaraj served as foreign minister in Modi's first cabinet from 2014 until May of this year. She was replaced by Subrahmanyam Jaishankar after deciding not to contest elections due to health concerns. In December 2016, she successfully underwent a kidney transplant operation.

Swaraj was an active presence on social media, often engaging directly with Indians abroad. In her final tweet, she thanked Modi for abolishing Kashmir's autonomous status, saying she was "was waiting to see this day in my lifetime."

Prolonged droughts and crop failures are causing some Indian villages to empty. For the women and elderly left behind, it's a struggle. As temperatures continue to rise, there's little hope their loved ones will return. (06.08.2019)

Amazon has been forced to pull a doormat resembling the Indian flag from its Canadian website following threats from India's government. India's foreign minister had threatened to ban employees from entering the country. (12.01.2017)