France's former first lady has come under fire for a new book that paints an unflattering picture of president Francois Hollande. Among those criticizing Valerie Trierweiler is the woman the president left for her. 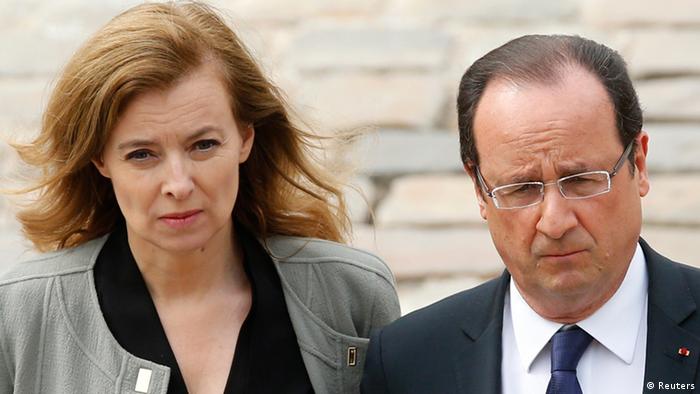 Valerie Trierweiler, former first lady of France, has claimed in a tell-all book that French President Francois Hollande secretly despises the poor, a revelation that could severly damage the already unpopular Hollande.

In the book, entitled "Merci pour le moment," ("Thanks for the moment"), which hit the shelves this Thursday, Trieweiler says that in private, Hollande refers to the poor as "the toothless."

However, the previous romantic partner of Francois Hollande and mother of his four children, Segolene Royal, used an interview with news broadcaster BFM TV on Thursday to shoot down the claim, saying it was completely without merit.

"It's rubbish, it's the exact opposite of the political commitment of a great leader of the left," said Royal, who is currently a minister in Hollande's cabinet. "One must judge politicians by their acts."

Trierweiler began dating Hollande back in 2005, when he was still in a relationship with Royal, who is also a former Socialist presidential candidate.

Details of the break-up

The book also includes details about the breakup of Trierweiler and Hollande after the news of the president's affair with actress Julie Gayet broke in January.

Trierweiler describes taking sleeping pills after learning of the affair. She subsequently spent a week in hospital being treated for what officials at the time described as a bad case of the blues.

Also coming to Hollande's defense on Thursday was Prime Minister Manuel Valls, who described the book as "outrageous."

Marine Le Pen, leader of the far-right National Front, who is usually a staunch critic of Hollande, said the book amounted to a "profoundly indecent settling of scores."

French President Francois Hollande has some explaining to do after a paper revealed an alleged affair. Meanwhile, his long-term partner, Valerie Trierweiler, has been hospitalized. John Laurenson sends this Postcard. (13.01.2014)

Francois Hollande and Valérie Trierweiler want to remain just another couple after moving into the Elysée Palace. There is growing pressure on them from the public, however. (14.05.2012)