Postcard from Paris: First Lady and First Mistress? | Europe | News and current affairs from around the continent | DW | 13.01.2014

French President Francois Hollande has some explaining to do after a paper revealed an alleged affair. Meanwhile, his long-term partner, Valerie Trierweiler, has been hospitalized. John Laurenson sends this Postcard. 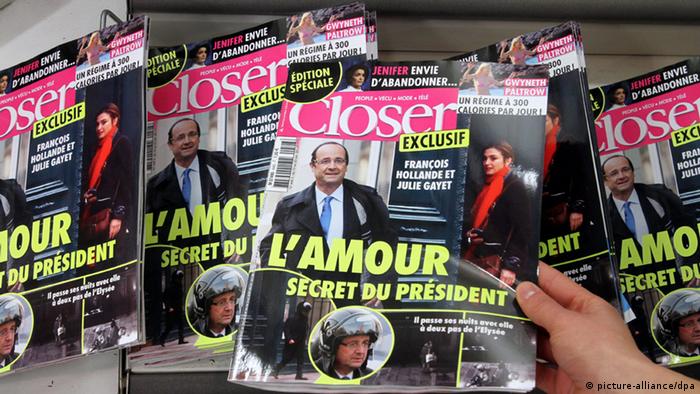 Francois Hollande has had a secret love affair with an actress called Julie Gayet for at least the past six months, according to a 7-page exposé in the gossip magazine Closer. Contacted by French news agency AFP, the Elysee Palace did not dispute the truth of any of the "revelations".

Julie Gayet, 41, is a well-known cinema and TV actress who has starred in dozens of films over the last 20 years. 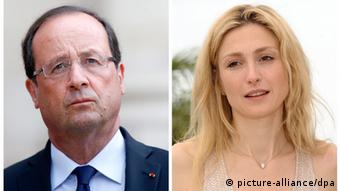 Rumour has it that Hollande had an affair with Gayet, an actress 18 years his junior

Her most notable movies were Select Hotel (for which she received a prize) and Three Colours: Blue, one of a trilogy of films by Krzysztof Kieslowski celebrating the French flag which pre-figured Gayet's close involvement with the French executive.

She supported Hollande's successful bid for the presidency two years ago and had several meetings with the president in the town of Tulle where he was mayor and Member of Parliament.

'Attack of the blues'

Shortly after the news of the alleged affair broke, the president's partner, Valerie Trierweiler. was admitted to hospital.

"There was no attempt at suicide… Just an attack of the blues," said a friend.

Less close acquaintances of what many believe will soon be the ex-"first girlfriend" speculated on what the feelings of Segolene Royal might be on hearing this news. 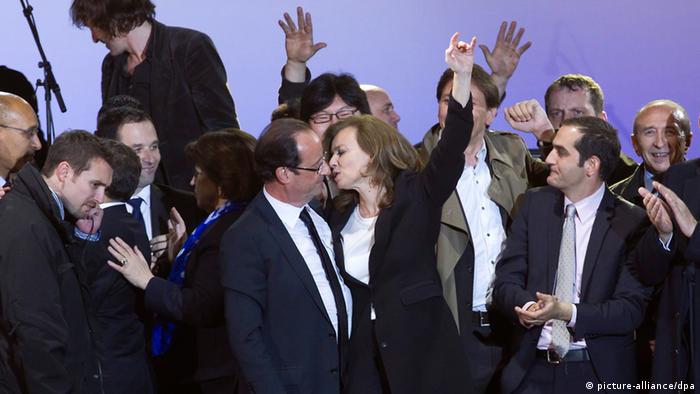 A thing of the past? Hollande with Trierweiler who has been his partner since 2007

It was not long ago that Royal, a former Socialist Party presidential candidate with whom Hollande had three children, found out that her partner was having an affair with Trierweiler.

The photographs published by Closer show a new, racy, side to the French president. On the front cover we see a paparazzi shot of him wearing a motorcycle helmet.

Hollande was in the habit of going to meet Gayet by scooter, accompanied by a security man motorcycle out-rider who, the magazine adds, sometimes brought croissants to the couple in the morning.

Closer claims that meetings with Gayet took place at a flat loaned to the actress by a friend. The flat is located in the - as some have suggested aptly-named - Rue du Cirque, conveniently near the Elysee Palace.

Ms Gayet's helpful friend used to be married to a man named Michel Ferracci whose implication in this affair will not help the case of those from the President down now insisting that this is a private matter that does not concern the French people.

Ferracci used to work in a gambling establishment called the Cercle Wagram near the Arc de Triomphe. He was reputed to be close to Richard Casanova, the former boss of a Corsican gang called La Brise de Mer (The Sea Breeze) who was assassinated in 2008. 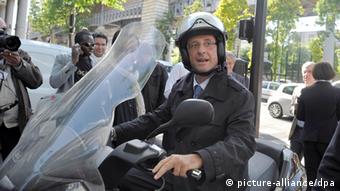 Hollande is said to have visited Gayet on his motorcycle

After a police investigation into a vast money-laundering operation centred on the Cercle Wagram, 15 people were put on trial including Ferracci who received an 18 month suspended sentence for fraud.

He has since changed careers to become an actor, playing in a TV series called Mafiosa.

Although Ferracci's name was on the letter box of the French presidential love-nest "I never lived there," Ferracci has since told the press. He didn't own it or pay the rent either, he says.

According to the (serious) news magazine Valeurs actuelles, the flat belongs to "the wife of the head of a company listed on the French stock exchange".

This woman, says the paper, is the benefactor of numerous artists and actors.

In the past, President Chirac used this same flat for secret liaisons, says Valeurs actuelles and, it continues, other politicians have put the property to similar use.

Political commentators have been speculating on what effect the revelations of his affair with Gayet will have on Francois Hollande's popularity.

The former head of the IMF, Dominique Strauss-Kahn, will face charges of pimping in a French court, prosecutors say. The scandal-dogged Strauss-Kahn could face up to 10 years in prison if convicted. (26.07.2013)