Volksmusik fans in Germany were glued to their televisions on Thursday night for the last episode of "Lustige Musikanten." Public broadcaster ZDF is cancelling the folk music program and older fans are up in arms. 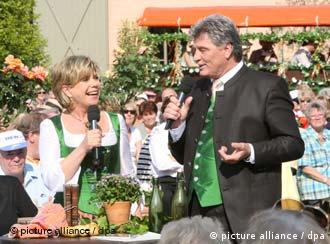 "Lustige Musikanten" or "The Merry Musicians" is one of many folk music programs on German television. Hosted by Marianne and Michael -- the dream couple of Volksmusik -- the show, however, takes its final curtain call on Thursday night.

Public broadcaster ZDF said it was not renewing the respective contracts due to planned program reforms for 2008. The channel said it wanted to make itself more attractive for younger viewers. Yodeling singers in dirndls and lederhosen apparently just weren't doing the trick.

A recent poll showed that in the first six months of 2007, ZDF only held a market share of 6.6 percent in the 14-to-49 year-old range -- one of the worst results in the station's history. 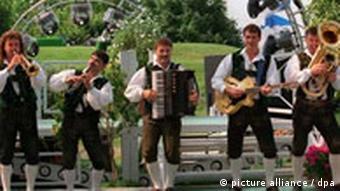 "This means older people are being excluded," Knöpke said in interviews with various German papers. "In our opinion, this violates the anti-discrimination law." ADS has now ordered a legal expert analysis whether a lawsuit against ZDF would be viable.

"If the stations take Volksmusik shows out of their programs because the viewers are too old, then several parts of the population are being shut out," he said.

"This is an insult to everyone who rebuilt Germany after the war," Unruh told the mass circulation paper Bild am Sonntag.

According to Knöpke, ZDF's program policies were not forward-looking. He said many sectors had recognized that it wasn't the 14-to-49 year-olds that were the most interesting target group, but rather those over 50. 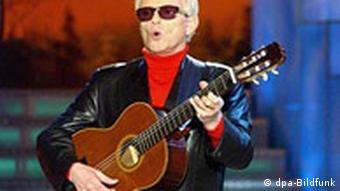 Heino is one of Germany's most popular Volksmusik singers

"The industry is just beginning to discover the growing group of senior citizens as consumers," he said.

Whether ZDF's new policies will attract younger viewers remained to be seen. According to Knöpke, when it came to music, young people would stick to MTV and VIVA anyway.

ZDF is reportedly unperturbed by the uproar. It said no one had a right to a specific type of music on television.

Some media have also questioned ADS' motivations. The group, with some 12,000 members, represents the interests of musicians, management, record companies and other institutions which live off of Volksmusik. Public television is a major source of publicity for their work.

Say "German" and "brass" and you might be forgiven for thinking of oompah-bands. But Germany's "Posaunenchöre" -- literally, trombone choirs -- are not your typical brass bands: they don't even play folk music. (22.06.2007)

German Labels Search for the Real Sound of America

For three decades, the German labels Bear Family Records and Trikont have rescued classic American music from obscurity. From hillbilly to deep-fried Southern funk, anything goes -- as long as it's got soul. (11.07.2007)

Two icons of the German-speaking popular folk music scene are retiring this year: Heino and Karl Moik. What will their departure mean for the future of this genre? (18.07.2005)