Social media companies would be slapped with large fines if they "de-platform" political candidates in the US state. Big tech firms and activists oppose the law. 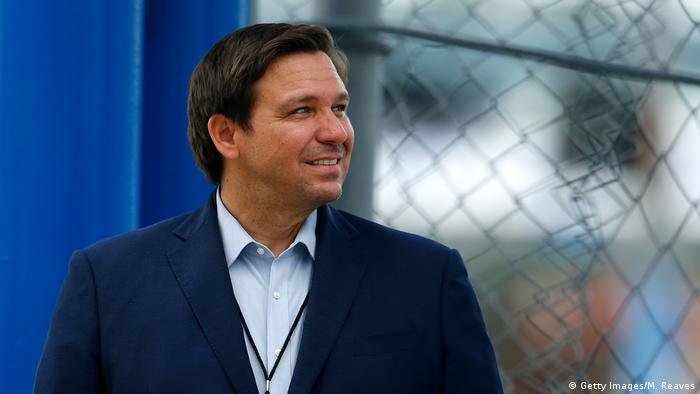 Ron DeSantis, a Republican, is a major ally of former President Donald Trump

Florida Governor Ron DeSantis on Monday signed a law that would force tech companies to pay large fines if they remove political candidates off their social media platforms.

Under the legislation, social media companies would need to pay $250,000 (€204,501) per day if they remove an account belonging to a statewide political candidate in Florida. If social media platforms remove the accounts of local candidates, they could be charged $25,000 a day (€20,445).

In addition, Florida's attorney general would be given greater legal power to prosecute such companies.

The legislation will come into effect on July 1.

What did the governor say about the legislation?

"Some of these massive, massive companies in Silicon Valley are exerting a power over our population that has no precedent in American history," DeSantis said during an event in Miami celebrating the bill. "One of their major missions seems to be suppressing ideas."

Opponents of the law say it infringes on the First Amendment of the constitution, which allows for freedom of speech and expression.

Corbin Barthold, a policy counsel for the TechFreedom nonprofit, called the law a "First Amendment trainwreck."

"When it comes to free speech, a website is no different from a newspaper or parade: it has a fundamental right to decide what speech it will allow, and what speech it won't, on its platform," Barthold said, adding the law is "unconstitutional." The law will likely be met with a flood of lawsuits, which could disrupt its implementation in the state.

The signing of the bill comes after former President Donald Trump was banned from Twitter and Facebook following the storming of the Capitol by rioters on January 6. Critics claim the former president's posts on social media platforms incited the pro-Trump rioters to enter the Capitol building.

What are DeSantis' political goals?

DeSantis is seen as one of the top contenders for the 2024 Republican presidential nomination if Trump does not run. During his tenure as Florida's governor, DeSantis has leaned heavily into conservative culture war issues, signing legislation to crack down on rioters and speaking out against the idea of vaccine passports.

Republicans in recent years have grown concerned about the influence of big tech companies, and have argued that social media platforms are biased against conservatives. Trump has previously called for a repeal of Section 230 of the Communications Decency Act, which shields companies from being sued over what users post on their platforms.