Floods spread to northern Germany | Germany | News and in-depth reporting from Berlin and beyond | DW | 09.08.2010

High water levels have been receding in the state of Saxony, but officials in Brandenburg are on alert as the flooding heads north. The River Spree, which goes through Berlin, is expected to burst its banks on Tuesday. 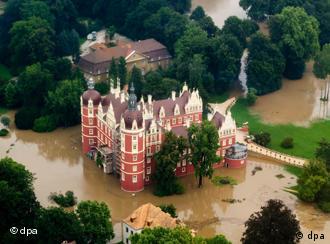 The regions around the German-Polish border were preparing for floods, as the high water levels of the River Neisse pushed northwards towards Brandenburg and the River Spree on Monday.

The Neisse, which marks Germany's border with Poland, has put the states of Saxony and Brandenburg on flood alert after reaching record high levels.

Swollen by heavy rainfall, the Neisse broke through two dikes and flooded villages near the town of Bad Muskau in the eastern state of Saxony. The nearby UNESCO World Heritage site, the Fuerst Pueckler Park, was partially flooded. 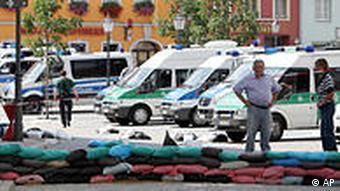 80 people were evacuated from Bad Muskau due to the flooding

The Neisse reached an estimated peak of seven meters (23 feet) around Bad Muskau, compared to a normal depth of just one meter.

Water levels had started to recede in Saxony, but the floods are traveling northward, reaching the Spree River in the state of Brandenburg, which surrounds Berlin.

The high water levels that now threaten Brandenburg follow several days of floods brought on by strong rainfall in central Europe and a burst dam in Poland. The floods have caused widespread damage and the deaths of at least 11 people in the Czech Republic, Germany and Poland.

Three people died over the weekend in the German city of Chemnitz, after they were trapped in a cellar by rapidly rising water. 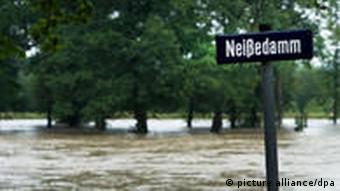 In the border town of Goerlitz, where almost 1,500 people had to be evacuated, water levels reached a record of 7.07 meters before falling back slightly on Sunday evening.

Residents were temporarily cut off from the electricity grid, until reconnected on Monday as floods subsided.

It is thought that the flooding in Saxony has slowed the advance of the high water levels. As the waters receded in parts of the state, officials said it was too early to put a price on the overall material damage done by the floods.

Visiting the flood-affected town of Bautzen, Federal Interior Minister Thomas de Maiziere said the government would consider financial aid for the affected regions. He also called for cooperation between federal and local authorities.

The floods that have wreaked havoc in parts of Poland, the Czech Republic and the German state of Saxony are spreading west. The flooding of the Neisse River is expected to reach the state of Brandenburg later on Monday. (09.08.2010)

At least nine people have died in central Europe after heavy rain caused widespread floods. Water levels have risen to record highs on the borders of Germany, Poland and the Czech Republic. Thousands have been evacuated. (08.08.2010)

Severe storms and flooding have left three people dead in Saxony in eastern Germany. Authorities have forecast more rain in the region close to the border with Poland and the Czech Republic. (07.08.2010)