At least nine people have died in central Europe after heavy rain caused widespread floods. Water levels have risen to record highs on the borders of Germany, Poland and the Czech Republic. Thousands have been evacuated. 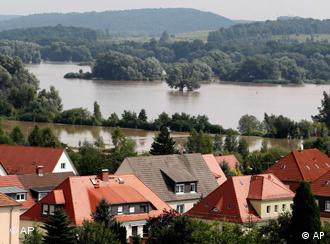 Water levels in Goerlitz reached their highest ever

Flooding brought on by strong rainfall in central Europe and a burst dam in Poland have caused widespread damage and the deaths of at least ten people in the area near the borders of Poland, Germany and the Czech Republic.

The deep, eastward-flowing river Viola in the municipality of Neukirchen in Saxony in eastern Germany became a raging torrent on Saturday, drowning an elderly couple and their neighbor as they tried to save their washing machine from flooding in the basement.

The eastern German states of Saxony-Anhalt and Brandenburg are now bracing for the arrival of flood waters.

Water levels were highest in Zgorzelec on the river Neisse at 7.4 meters, according to Sunday reports from Polish broadcaster TVN24. Parts of the city were submerged and several historic buildings have been damaged.

The Neisse has swollen dramatically after a dam on the Witka reservoir in Poland burst on Saturday evening. Polish Interior Minister Jerzy Miller, who visited the crisis area overnight, said repairing the dam was the highest priority.

Water levels in Saxony, eastern Germany also broke records, with the state flood agency measuring 7.02 meters on Sunday morning in the border town of Goerlitz - the highest since the government began keeping records in 1912.

Normal water levels in the summer are around 1.7 meters. 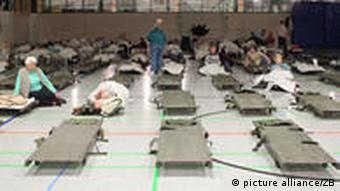 Hundreds have been forced to evacuate their homes

"I wouldn't speak of a relaxation at the moment, but water levels will slowly begin to drop in the afternoon," said hydrologist Uwe Buettner.

But in and around the town of Goerlitz, which lies on the Neisse and where more than 1,400 people were forced to leave their homes, relief seems far away.

"It is still raining hard and there is no let-up in sight," said a spokesman for disaster management in Goerlitz.

Train services connecting Saxony with the Czech Republic were also disrupted because of flooding on the river Elbe.

On a request from the government in Prague, the German Red Cross sent four of its helicopters to the Czech Republic. Aid organizations said several people there were waiting on the roofs of their houses for help.

Severe storms and flooding have left three people dead in Saxony in eastern Germany. Authorities have forecast more rain in the region close to the border with Poland and the Czech Republic. (07.08.2010)