Thousands of people in western Nepal have been displaced by heavy rains, flash floods and landslides. The floods have also put Indian authorities in the state of Bihar on high alert. 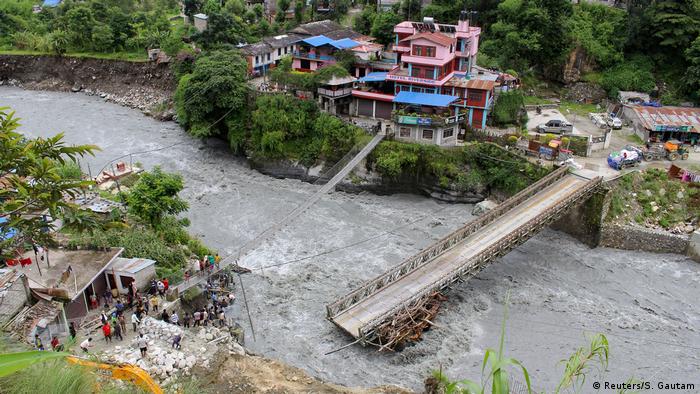 Twenty people were killed and at least 13 others were missing in the Myagdi district alone, said district administrator Gyan Nath Dhakal.

"Rescuers are looking for those who are still missing in Myagdi," Dhakal said, adding that 50 people had been brought to safety using helicopters.

In the neighboring Kaski district, rains and floods killed seven people, while seven others were killed in the Jajarkot district. 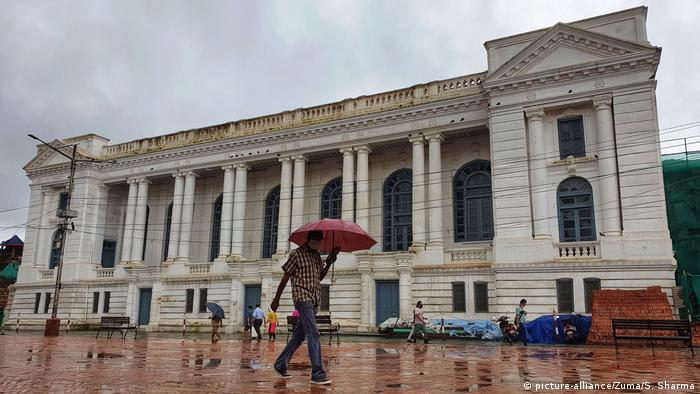 A man walks in front of the Gaddi Baithak Palace in Kathmandu, Nepal as rains lash the country

In the southern plains bordering India, the Koshi river, which causes deadly floods in the Indian state of Bihar almost every year, was flowing above the danger level, police said.

Monsoon-induced disasters are common in Nepal owing to the country's mountainous topography and dozens of big rivers. Since the beginning of the monsoon season in June, scores of people have lost their lives in floods and landslides.

The floods in Nepal have put the authorities in Bihar on high alert.

Last month, more than a million people were forced to flee their homes in the northeastern Indian state of Assam by floods when the Brahmaputra river burst its banks and inundated over 2,000 villages.

Monsoon-triggered floods and landslides have killed at least 85 people in South Asia in the past few days. Almost 870,000 people have been affected by floods in India's northeastern state of Assam. (14.07.2019)

With the publication of a new political map, Nepal has toughened its stance on a row over a stretch of disputed land that lies at a strategic three-way junction with China and India. Delhi accuses Beijing of interfering. (03.06.2020)

While independent media outlets flounder amid mass revenue losses due to the nationwide lockdown, the Nepalese government has turned its focus to boosting state-run media. Lekhanath Pandey reports from Kathmandu. (03.07.2020)