The German Archaeological Institute's mission to Egypt has found an ancient gymnasium that was used to train young Greek-speaking men in sports, literacy and philosophy. The group has been working at Watfa since 2010. 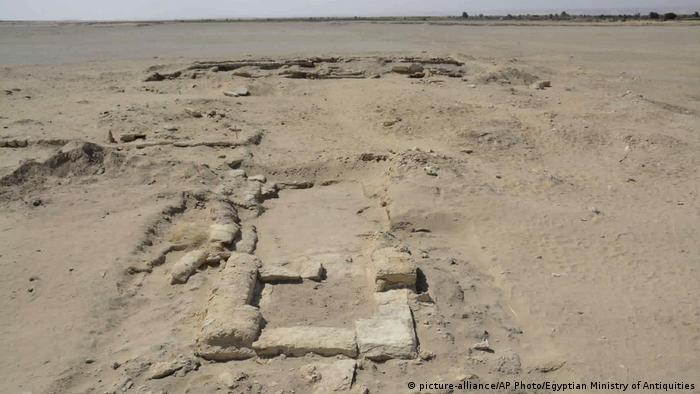 Measuring at least 30 meters in length, the sensational uncovering of a cavity within the 4,500-year-old Cheops Pyramid in Giza, Egypt poses an ancient riddle for researchers. (02.11.2017)

Although ancient Egypt and China never communicated with each other, they had many things in common. The exhibition "China and Egypt. Cradles of the World" shows inventions made in both countries a long time ago. (12.07.2017)

The Watfa gymnasium on the site of an ancient village southwest of Cairo in the Faiyum Oasis is the first of its kind to be discovered in Egypt.

The gymnasium included a large meeting hall, once adorned with statues, a dining hall and a courtyard in the main building. Surrounded by gardens, this center of Greek learning for young men in ancient Egypt also had a 200-meter (660-foot) running track, on which they trained for important 180-meter races.

The elite school or gymnasium was similar to others founded by wealthy Greek-speaking people who wanted their sons to be trained in sports, to learn to read and write, and to enjoy philosophical discussions.

All of the major cities of the Hellenistic world, including Athens in Greece, Pergamon and Miletus in Asia Minor, and Pompei in Italy, had gymnasiums, where young men over the age of 18 received training for prestigious local and international contests which were a central part of the social and spiritual life of the Greeks.

"Although much smaller, the gymnasium of Watfa clearly shows the impact of Greek life in Egypt, not only in Alexandria, but also in the countryside," Professor Cornelia Römer, head of the DAI mission said. The DAI has been conducting surveys and excavations at Watfa since 2010.

Watfa was founded 2,300 years ago in a small, rural village of 1,200 people - two-thirds Egyptians and one-third Greeks - by King Ptolemy II. The king named the village in Fayoum Oasis for his second sister Philotera.

Philoteris was one of the new villages founded in the years after Alexander the Great invaded Egypt. Thousands of Greek-speaking settlers moved to the territory by the River Nile and built public buildings and baths which became meeting places for themselves and their Egyptian neighbors.

The Hellenistic gymnasium was run by the village authorities and open to young men up to the age of 30. Women, slaves, freedmen, tradesmen, male prostitutes, drunkards and madmen were excluded.

The Ptolemaic dynasty ended with the Roman conquest in 30 BC although Greek culture continued to thrive in Egypt until the Muslim conquest in the seventh century.