Dismissed in 1995 for union activism, one man took on South Korea's most powerful conglomerate and has finally reached a settlement. For over 300 days, supporters passed the protester food and clothes using only a rope. 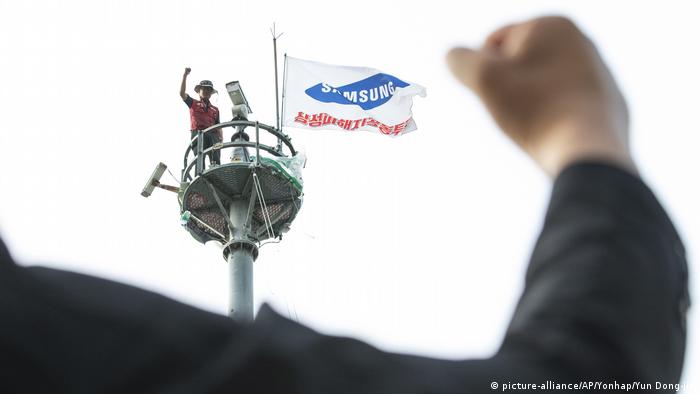 A former Samsung employee who spent 354 days atop a traffic camera tower in the South Korean capital ended his protest Friday after the business conglomerate apologized and agreed to a settlement to resolve his 25-year-long grievance.

Sixty-year-old Kim Yong-hee waved a banner with a Samsung logo and a protest slogan while a rescue worker on a fire-truck ladder helped him down from the 25-meter (82-foot) high tower. Supporters gave him a bouquet of flowers as he landed.

On June 10, near to Samsung's headquarters, Kim climbed the tower overlooking the busiest intersection in Seoul and demanded that the multinational apologize and offer compensation for what he called its illegal decision to fire him in 1995 for trying to set up a labor union.

Kim had relied on supporters and activists to bring him food, clothes and phone batteries, which he then pulled up from the ground by a rope. 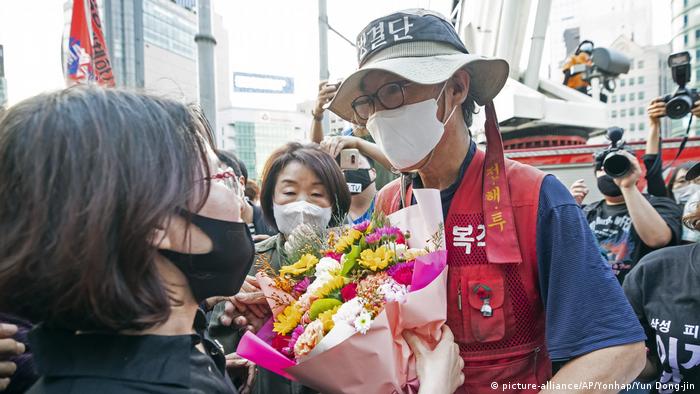 "I suffered panic disorder and had to constantly fight the urge to jump off ..." Kim told French news agency AFP, describing how he lived on top of "such a small space" that he could not even stretch his legs.

"I hope Samsung will now really guarantee all union activities of all employees," he said.

In its apology, Samsung said it should have done more to ease Kim's "pain and agony." The company also apologized for "failing to promptly solve the issue."

However, the firm did not clearly acknowledge Kim's claim that he lost his job due to union activism. At the time he was fired, Kim had been working at Samsung's now-defunct aerospace unit.

Neither Kim nor Samsung discussed details of the settlement reached, or whether Kim would be reinstated at the company.

Activists representing Kim announced in a statement that the former employee views Samsung's apology as redeeming his honor.

The occasion came weeks after Samsung heir Lee Jae-yong apologized for the company's previous "no labor union" policy that lasted for decades until 2019. Lee, who is currently on trial over corruption charges, promised to end decades of union sabotaging practices at the South Korean conglomerate.

Samsung is the largest of South Korea's family-controlled conglomerates – known as chaebols. The company's overall turnover is equivalent to a fifth of the national gross domestic product. Meanwhile, Samsung Electronics is the world's biggest smartphone maker.

Samsung, the world's largest chipmaker, has flagged a massive drop in earnings, blaming weaker sales and falling prices. Is the tech giant's first profit decline in two years a harbinger of the chip boom fizzling out? (09.01.2019)

Samsung’s new folding phone was supposed to break the mold. Turns out it’s just broken. But how damaging will the postponed launch of the Galaxy Fold ultimately be for the South Korean tech giant? (26.04.2019)