A fire has killed 10 people at the youth academy of one of Brazil's premier football clubs, Flamengo in Rio de Janeiro. The blaze broke out in a special facility where out-of-town youngsters live while training. 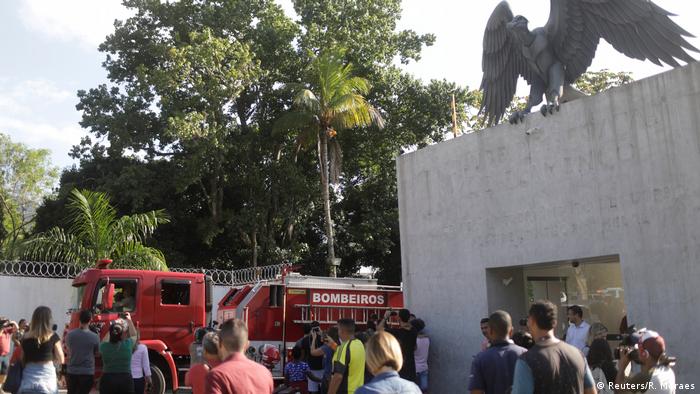 Flamengo's recently-expanded youth training facility at Ninho do Urubu went up in flames in the early hours of Friday morning, less than two months after it opened.

The facility included lodgings for players whose families did not live near the Rio de Janeiro club, one of Brazil's biggest.

"The kids from the Flamengo youth team were sleeping there at the time," firefighter Douglas Henault told Brazilian broadcasting giant Globo News.

Globo said youth players were among the dead, but it did not name its sources. It also broadcast images of distraught relatives who had rushed to the grounds and aerial footage of the fire's aftermath, including distorted corrugated roofing iron. Nearby trees were scorched.

Joao Pedro da Cruz, a 16-year-old Flamengo trainee, told the G1 news portal that he decided not to stay Thursday night and went instead to a friend's house.

"The majority of them (the team) stayed, my friends stayed (at the
facility)," he said. "Today I woke up and heard this terrible news."

No word on cause

There was no word early Friday on the cause of the fire.

The training camp lies in western Rio in an area that had already been hit by a heavy storm on Wednesday night, claiming at least six lives.

Vinicius Junior, a teenage Real Madrid forward who once trained at Flamengo, tweeted his condolences, saying he still couldn't believe what had happened but was praying for all involved.

Brazilian World Cup winner Romario, a former Flamengo player and now a senator in Rio, also offered the victims' families "all my solidarity."

Chapeco, a team in southern Brazil that lost 22 players in a plane crash in 2016, also tweeted: "We are extremely sad and shaken by the news of the fire."

Flamengo, one of the best-supported clubs in Brazil and known worldwide, had last year spent 23 million reais ($6.2 million, €5.4 million) to expand its facility used by its youth development program and top-flight football squad — after years of financial difficulties.

The complex includes several pitches, an aquatic park, a gym, a medical center and a mini stadium.

Former Bayern Munich winger Douglas Costa has admitted helping ti throw a football game in his home country, Brazil. It appears the match-fixing efforts had a direct influence on the outcome of the national title. (22.02.2018)

Germany's system of technical inspections started 150 years ago and now performs a wide range of checkups globally. But just how good are these certifiers, if inspected dams or breast implants turn out to be dangerous? (30.01.2019)