Germany's Finance Ministry has warned Greece not to expect "a blank check" from creditors. The harsh words from Berlin come as negotiations continue in Brussels to keep Greece in the eurozone. 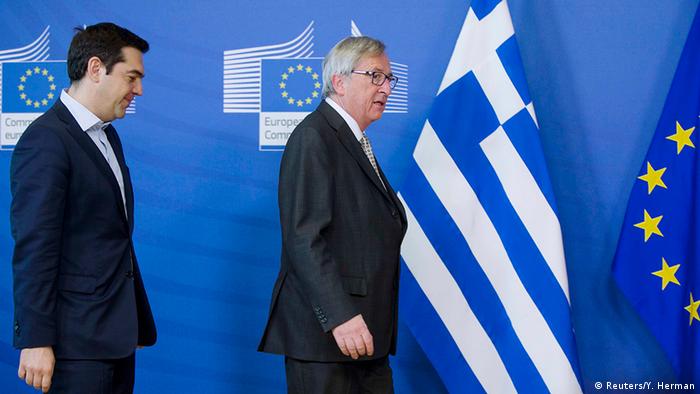 "We don't want Greece to leave the eurozone," Finance Ministry spokeswoman Friederike von Tiesenhausen said. "It's also important to say that there won't be a blank check," she added.

The international creditors have demanded a number of economic reforms in exchange for access to the 7.2 billion euros ($7.6 billion) still remaining in international loans. To avoid a default, Greece has received two sets of emergency loan, each in multiple installments, totaling 240 billion euros since 2010. Tsipras insists that his administration has started fulfilling the conditions agreed to last month for an extension of these programs.

Greece's government has lodged a complaint with Germany after Finance Minister Wolfgang Schäuble allegedly used the word "naive" to describe his counterpart in Athens, Yanis Varoufakis. The German finance minister says that Greek media misquoted him.

Schäuble appeared to double down on Thursday, however, saying in an interview with the Austrian state broadcaster ORF that if Greece failed to solve issues with creditors it could unintentionally drop out of the eurozone. Schäuble said that he "can't rule out" the possibility that the country would have to leave the eurozone in a "Grexident," or an accidental Greek exit ("Grexit") from the currency. Pierre Moscovici, the EU's economic and financial affairs commissioner, says such a result could prove catastrophic for all countries that use the euro.

A poll released on Friday by the public broadcaster ZDF has found that Germans share their finance minister's concerns. According to the poll, 52 percent of respondents believe Greece should leave the eurozone, while only 40 percent say that it should remain.

Eighty percent of respondents said Greece had not acted "sincerely" with partners, while only 11 percent say the opposite. According to the survey, Schäuble and Chancellor Angela Merkel remain Germany's most popular politicians, in stark contrast to their reputation in Greece, where they have become hated figures to many for their insistence on harsh austerity in return for aid.

Despite the jawing in Athens and Berlin, Merkel's spokesman, Steffen Seibert, insists that the issue has not descended into a "private feud." Seibert said that "the goal of the German government, the chancellor and the finance minister has been since the outbreak of the crisis to preserve the eurozone as a whole - with existing members - and to stabilize it."

Greece's new government has announced that it could pursue further reparations for Nazi atrocities during World War II. German officials have said the country will not pay.