German Finance Minister Wolfgang Schaeuble accused the US Federal Reserve of breaching international consensus. By buying additional US government bonds, he said, the Fed was creating problems for other economies. 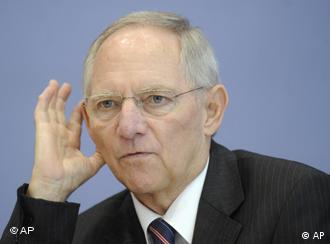 The US central bank's decision to buy additional government bonds in an effort to stimulate the economy is a breach of international agreements, German Finance Minister Schaeuble said on Thursday evening.

"I don't think that the Americans are going to solve their problems with this, and I believe that it is going to create extra problems for the world," Wolfgang Schaeuble said on public television Thursday.

The decision to buy $600 billion (420 billion euros) worth of government bonds, made by the US Federal Reserve during a two-day meeting earlier this week, contradicts an agreement made by G20 leaders, Schaeuble said.

"These huge economic problems cannot be solved with more debt," Schaeuble told reporters in Berlin. "That was the joint policy all developed countries, even the United States, agreed on at the G20 summit in Toronto." 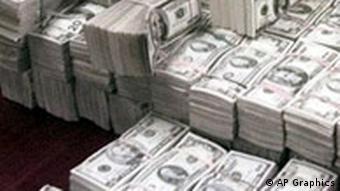 US government spending hasn't had the desired effect, Schaeuble said

The US plan, called quantitative easing, aims to put more money into the pockets of companies, consumers and homeowners but some financial analysts have expressed fears that it could lead to excessive inflation and an intensification of currency imbalances.

Schaeuble said he would not let Germany's opposition to the Fed's action get pushed to the back burner and that the issue would be addressed during the G20 summit in South Korea next week.

"I wish the Americans every success in dealing with their big problems effectively and swiftly," he said. "But if they look at the successes that Germany has had they will see that more and more deficits is not the way to do it."

Europe's largest economy, Germany is enjoying a strong recovery from the global economic crisis and has resisted calls for scaling back its austerity measures and lowering taxes.

The Fed's billion-dollar injection also failed to convince the European Central Bank. ECB President Jean-Claude Trichet announced on Thursday that the Frankfurt-based bank would maintain its course of slowly shutting off the money supply. 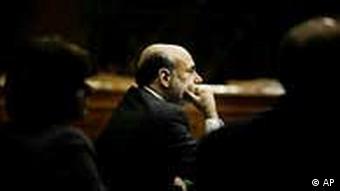 "This approach eased financial conditions in the past and, so far, looks to be effective again," he said.

Schaeuble hit back by saying that the Fed measures to revive the US economy have failed.

"They have already pumped an endless amount of money into the economy," the German minister said. "The results have been dismal."

Schaeuble added that the job market continues to be difficult and as does the overall economic situation.

"Fed could cause long-term damage"

Schaeuble's harsh assessment was supported by leading economists. The Fed runs the risk of causing long-term damage, said Michael Huether, director of the Cologne-based Institute for Economic Research (IW). The acquisition of government bonds by the Fed is a fundamental regulative sin, he said, and it would do nothing to solve the structural problems in the US economy.

Internationally, the German politicians were joined by Brazilian and Chinese officials in their criticism of the US plan to buy government bonds.

"Everybody wants the US economy to recover, but it does no good at all to just throw dollars from a helicopter," said Brazilian Finance Minister Guido Mantega.

The Fed also announced Wednesday that it would lower its key interest rate. The world's largest economy only had a growth rate of two percent in the third quarter of 2010. The unemployment rate in September was 9.6 percent.

Asian countries, including China, have criticized the US Federal Reserve's decision to pump an additional 600 billion dollars into the market, saying this will push their currencies to new heights against the dollar. (04.11.2010)

Fear of inflation grows in the eurozone

First the financial crisis, then the Greek debt crisis and now speculative attacks on the euro. As European leaders desperately struggle to stabilize their common currency, concerns over inflation are growing. (21.05.2010)

The rising strength of the euro, which has been trading at $1.40, has many economists worried about future demand for European exports. But a senior official at the European Central Bank says they are overreacting. (11.10.2010)

The central bank has announced a 0.5% interest rate hike — its highest increase in more than 20 years. The US move comes as a number of other countries cut lending rates to deal with rising prices.

With inflation up and unemployment down, the US central bank says it will cut bond purchases faster than planned and hinted that it could raise interest rates three times next year.

Inflation is back. Some warn of a return to the 1970s, while others downplay recent upticks, arguing outdated myths are being used to drive opposition to stimulus plans. The truth lies somewhere, as ever, in between.