Finally complete, Germany can't wait for the start of Euro 2016

On a day when the sun finally came out from behind the clouds over Evian, there was a sense that Germany were itching to get their Euro 2016 campaign started. However, questions remain about their central defence. 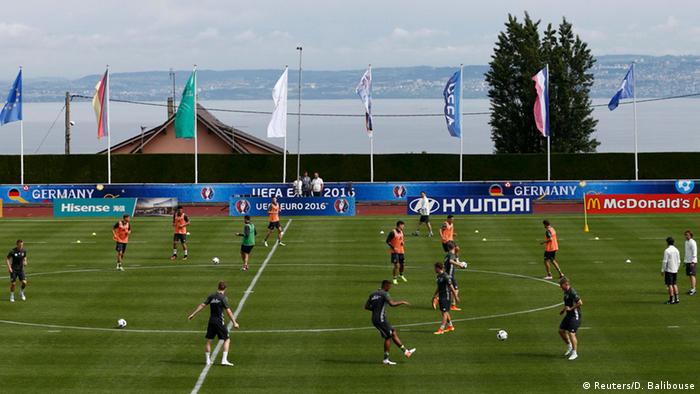 Day 3 of Germany's stay in Evian-les-Bains, the French town just across Lake Geneva from the Swiss city of Lausanne, began like the previous two, muggy with mainly cloudy skies, so that it was hard to decide what to wear.

"I couldn't decide whether to take my rain jacket with me or not," one member of the media quipped to an old colleague upon a chance meeting in the parking lot as they made their way to the morning's training session. "But I'm already sweating, so I left it in the car."

The reporters don't learn much from tagging along to the morning session. The photographers and cameramen have 15 minutes to get their shots or footage, then they are politely but firmly told that their time is up. It's only after this that coach Joachim Löw really puts his men through their paces.

A couple of hours later, and the media are on their feet again, this time just stepping from their work stalls in the press center into the news conference room next door.

This time it was veteran No. 1 goalkeeper Manuel Neuer and a relative newcomer to the national team setup, Jonas Hector doing the honors.

Not surprisingly, it was up to Neuer to field the majority of the questions, which he batted away with ease – beginning with the obvious question as to who he hoped to fill in for the still ailing Mats Hummels in central defense, and the newly injured Antonio Rüdiger, when Germany play their first game against Ukraine in Lille. 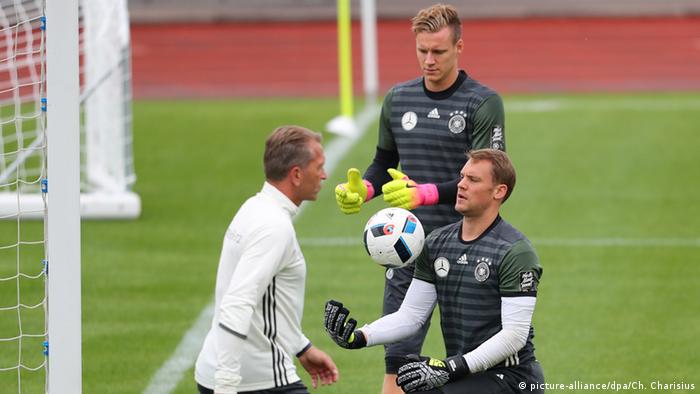 Germany's No. 1 between the sticks, Manuel Neuer (bottom left), is confident in his central defense, no matter who they are

"Basically, we will have a very good defense, no matter who plays," the 30-year-old Neuer said. "I get on well with each player and we will have a functioning defense out there."

Then there was the question of who should wear the armband, assuming the captain, Bastian Schweinsteiger doesn't start on Sunday. Neuer said that there were a number of players capable of doing so, and he was among them.

"Basically, as a goalkeeper, I have to take responsibility anyway and I see my role as guiding the younger players," he said. "As a goalkeeper, you are expected to talk a lot, both on and off the pitch."

Itching to get going

The overriding tone from both players, though, was that training is all well and good, but it is time to get the tournament started.

"We are pleased that it's finally going to get started. We can barely wait to get on the pitch," Neuer said.

For his part, Jonas Hector, who is about to embark on his first major tournament with the national team, conceded that he was "a little bit nervous, but in a positive sense." 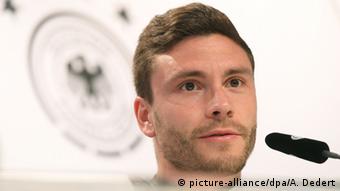 The team manager, Oliver Bierhoff indicated that after the training camp in Ascona and the first few days in Evian, the team was raring to go, despite the injury problems.

"We are looking forward to it getting started, we are always happy when it finally starts, when there is no longer just discussion and analysis, but instead, when we can really get down to it," he said.

Bierhoff was also able to confirm that Jonathan Tah had arrived at the team hotel shortly after he turned up at the press conference. This meant that after the arrival of Lukas Podolski a day earlier, Germany were finally up to their full 23-man compliment.

The 20-year-old Leverkusen defender is not expected to be in the lineup on Sunday though, coach Löw has indicated that the hole left by Hummels and now Rüdiger, will likely be filled by either Shkrodan Mustafi or Benedikt Höwedes .

By mid-afternoon, when most of the scribes had filed their copy and departed from the media center, they may have got a bit of a surprise. The grey and sometimes wet canopy that had covered Evian since Germany had arrived, had given way to a sunny blue sky – perfect weather for the start of a European party in France.