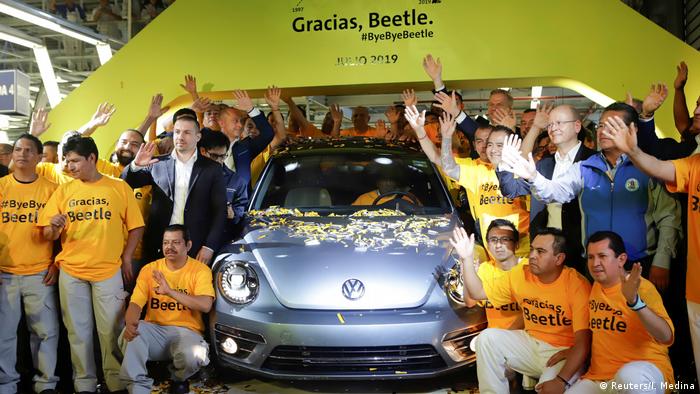 Wednesday's send-off for a car in metallic-blue was the last of 1.7 million "New Beetles" produced by Volkswagen in Mexico, and ended more than seven "very important" decades of manufacture, said the German car giant.

Volkswagen's Puebla works, southeast of Mexico City, would, however, continue producing different VW models, including the Golf and Jetta, while focusing on electric and larger family vehicles for the United States.

At Wednesday's ceremony, complete with mariachi band and confetti, VW Mexico CEO Steffen Reiche said the era had ended for a car that had "conquered the hearts of the people with its special design and quality."

"Today is the last day. It has been very emotional," he said.

The first "Beetle," or Käfer in German, was conceived in the 1930s by a design team led by engineer Ferdinand Porsche, tasked by German dictator Adolf Hitler.

During the war, VW used slave labor at what became its headquarters Wolfsburg in northern Germany and documented on site since 1999 in former air raid bunker.

Read more: Hitler and 'his Volkswagen'

After World War II, in Allied-occupied Germany, the car was rebranded and went into mass production. Exports of the reputedly robust vehicle, with a rear air-cooled motor, began to the United States in 1949.

The original Beetle series was sold in Germany up until 1985, latterly as Beetles imported from Mexico. Assembly in Mexico was terminated in 2003, ending a total run of 21.5 million cars produced.

In 1997, Pueblo had already begun production of the successor "New Beetle," emulating the original's round shape. A second-generation "New Beetle" followed in 2011.

"The new ones don't get uphill, and the old ones can climb any incline without a problem," said taxi driver Adrian Martinez.

Businessman David Alvarez said his 2008 New Beetle with a roll-down top still "turns a lot of heads in the streets."

The final car produced Wednesday will remain at Volkswagen's museum in Puebla.