In Bashir, a Shiite Turkmen town recently liberated from the "Islamic State," tensions that could lead to a new conflict in Iraq are palpable. Florian Neuhof reports from northern Iraq. 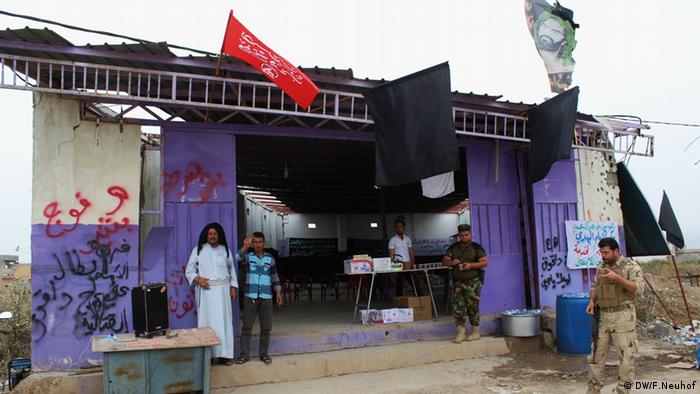 Religious songs blare from a loudspeaker in front of a simple concrete building and echo down the high street running through Bashir, a small Iraqi town that is the site of the latest victory against the crumbling "Islamic State."

Draped in flags, covered in graffiti and defaced by bullet holes, the building has been turned into an impromptu community hall of sorts, where simple meals and tea are served under its corrugated roof to the Shiite fighters who finally wrested control of the town from IS a few days earlier. In the back of the solitary room, carpets have been placed and banners spread across the wall. Devout fighters pray, eat and relax here.

Outside, the occasional crackle of gunfire can be heard. Groups of armed men pick their way through the rubble of destroyed houses, sometimes a car passes through the deserted streets.

"We now hold the ground, that is the most important thing," Abu Jaffar, the commander of the local Turkmen fighters who took part in the liberation of the town, told DW. 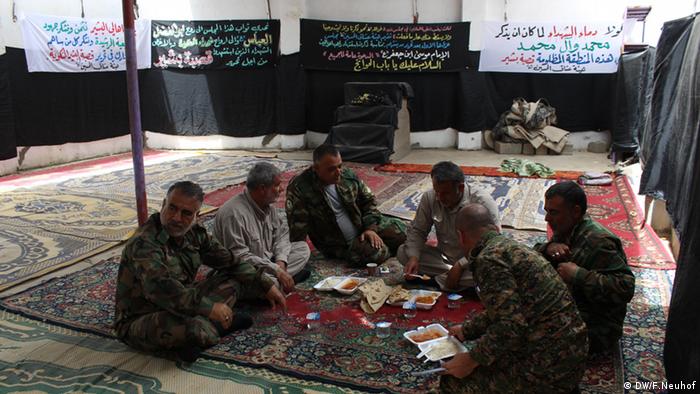 Abu Jaffar was amongst the mostly Shiite Turkmen inhabitants who fled Bashir when IS took the town on June 16, 2014. He was part of the group of townsfolk that tried to expel the invaders two weeks later, but were repelled with heavy losses. He led the roughly local 300 militiamen that finally managed to retake their town on May 1 after many days of fighting, and with the help of Kurdish peshmerga fighters and a Shiite militia group from the south of Iraq.

IS still clings on to neighboring villages, and every now and again fire a mortar round into Bashir, but the Turkmen once again control the town they abandoned almost two years ago. They now face the uphill struggle of rebuilding their homes and finding their place in the shifting political landscape of Iraq.

When IS stormed into northern Iraq in 2014, it stirred up simmering tensions between ethnic and religious communities. As the Iraqi army melted away, the Kurds quickly took control of Kirkuk, the oil-rich city half an hour's drive from Bashir. The peshmerga have since expanded the area under their control by pushing IS back from Kirkuk. The Sunni extremists are on the back foot and losing territory in Iraq, but they have sown the seeds of future conflict.

Kirkuk is ethnically diverse, with Kurds, Arabs and Turkmen forming the largest groups. It is by far the biggest prize in the so-called disputed territories, a broad swathe of land stretching along the autonomous Kurdish region that is claimed by both Baghdad and the Kurds.

The Turkmen, who in and around Kirkuk are largely Shiite Muslims, mistrust the mainly Sunni Kurds, and many lean towards the Shiite-dominated government in Baghdad. After the collapse of the Iraqi army, Shiite militia groups known as the Hashd al Shaabi took up arms against the "Islamic State," and thousands of Turkmen formed into units affiliated with the Hashd.

In Bashir, the local Turkmen Hashd fighters were augmented by the Imam Ali Al Abbas Brigade, a Hashd al Shaabi outfit from the south of Iraq. But these forces proved to be insufficient, and peshmerga holding the front at Bashir had to join the fight before IS was finally flushed out. 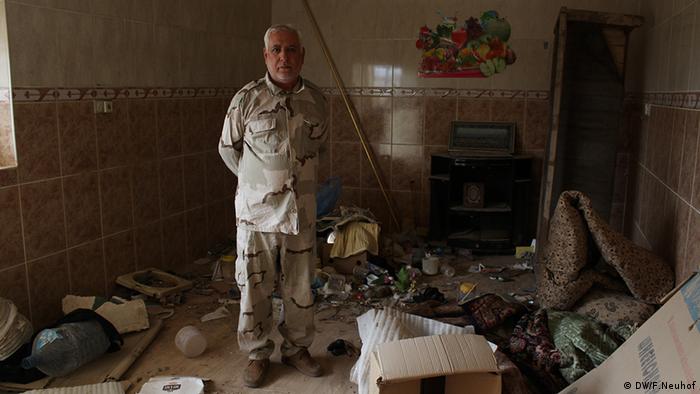 Adel Akbar, a 55-year-old Turkmen, came back to Bashir to inspect the damage to his house

The alliance is brittle. Only a week before the recapture of Bashir, local Turkmen and allied Hashd al Shaabi had clashed with the peshmerga and the Kurdish inhabitants of Tuz Khormato, another town near Kirkuk, as long-standing tension escalated into several days of fighting.

In Bashir, the proximity of the common enemy IS and the absence of peshmerga in the town make such clashes unlikely, for now.

With IS banished, residents trickle in to see what is left of the town that once housed around 1,200 families. Some are relieved to find their house still standing, others return to find their homes reduced to rubble. While their fortunes differ, they are united in their unwillingness to become annexed by the Kurdish Regional Government (KRG), which administers the autonomous region that harbors strong ambitions to break away from Iraq.

"No Shia Turkmen will accept to be part of the KRG," says Adel Akbar, a 55-year-old family man, as he sifts through piles of his belongings that lie strewn throughout his house. IS ransacked his property, but left it standing.

Others are not so lucky. IS blew up the houses of local officials, while air strikes destroyed buildings sheltering the militants. Mortars, rocket propelled grenades and heavy machine guns have torn wide holes into facades, and the jihadists knocked through the walls of houses they occupied and built tunnels between them to remain unseen from above. Anything of value has been looted, and improvised explosive devices planted by the retreating IS fighters pose a lethal threat. 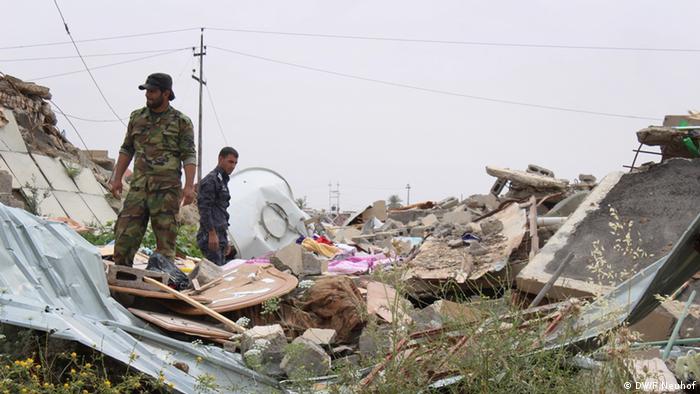 The failure of the central government to protect them from IS, and the sectarian tensions stoked by Baghdad's Shiite government have done nothing to convince the Turkmen of Bashir that their future lies in a Kurdish state.

"The people here can't accept a Kurdish government. There are big differences in language, culture and religion," says Sidiq Ali Mohammed, one of the handful of Kurdish residents of Bashir.

The Hashd al Shaabi from outside Bashir share this distaste for Kurdish expansionism.

The Al Abbas fighters who helped liberate the town are nowhere to be seen, but Saeed Nabil, a student at a religious institute in Najaf, is present. The man from Nasiriyah, a city deep in the south, has been holding sermons for Shiite fighters in the area for over a year, reinforcing their sense of religious duty in the fight against IS.

"No, never," he replies firmly when asked if Bashir could become part of Kurdistan. "This will remain part of Iraq."

The Hashd al Shaabi are motivated by their Shiite belief, and are heavily supported and influenced by Iran. Having fought to keep IS out of the Shiite heartlands, they are also loath to lose any ground to the Kurds.

To prevent this from happening, they are spreading their influence as much as they can.

"The Turkmen in Kirkuk feel that the Hashd al Shaabi are protecting their rights," says the local head of the Hashd's intelligence service, who refuses to give his name and is not from the area, simply saying he is "from Iraq." 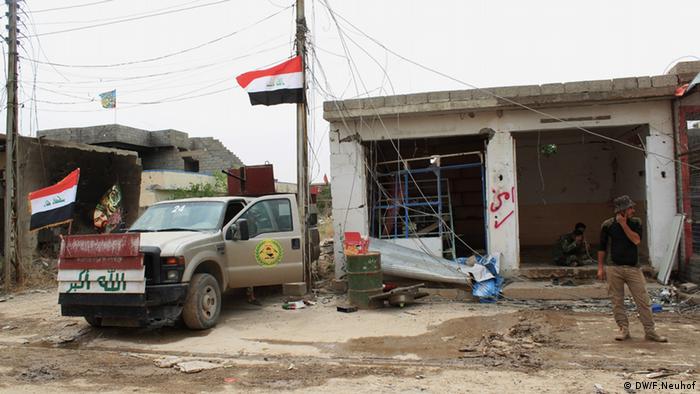 Sitting amongst the Turkmen fighters over lunch, he commands significant authority in Bashir, and he is quick to indulge in conspiracy theories straight out of Tehran's propaganda machine.

"For 1,000 years, Sunnis and Shias lived together peacefully. But Israel and the Mossad have plans to divide us. If there are problem between us, they can steal our oil," he says.

The KRG, which hopes to split from Iraq, has close ties with the US and already exports much of its oil to Israel, easily falls foul of such sentiments. With a long history of suffering at the hands of Baghdad, the Kurds are in no mood to yield to demands from the Arab south and give back Kirkuk, which they regard as Kurdish. Once the "Islamic State" is vanquished, the tensions over the disputed territories could escalate into a fully fledged conflict.

Having just reconquered their battered town from IS, the Turkmen of Bashir could soon be forced to pick sides in a new war tearing Iraq apart.

One hundred years ago, the Middle East was divvied up between the French and the British. The historian Maurus Reinkowski talks with DW about the long-term effects of the colonialist splitting up of the spoils. (08.05.2016)

Iraqi Prime Minister Al-Abadi has failed to abolish sectarian and party quotas for government positions. The threat of a shutdown now looms, while "Islamic State" continues to control large parts of the country. (03.05.2016)

Unpaid wages and a flagging economy have zapped the morale of the Kurdish fighters manning the front line against the "Islamic State" in Iraq. Desertions are starting to thin the ranks, reports Florian Neuhof from Irbil. (02.02.2016)