An Iraqi army official has described the fighting in Mosul as "one of the hardest battles we've faced." With the help of Kurdish peshmerga and Shiite militias, Iraqi forces have launched a campaign to liberate the city. 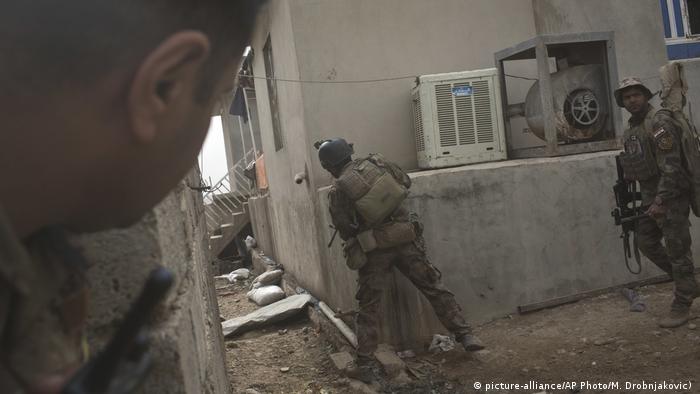 The Kurdish peshmerga forces have stopped on the outskirts of Mosul under an agreement with Baghdad. DW speaks with Tomas Olivier of the security consultancy Lowlands Solutions to find out why.

'IS' terrorizes civilians in Mosul

As the anti-IS coaltion moves in on Mosul in northeren Iraq citizens in the besieged city are being abused as human shields by "Islamic State" militants. Resistance is dealt with harshly; not even children are safe. (04.11.2016)

The Iraqi campaign to uproot the so called "Islamic State" (IS) from its stronghold in Mosul slowed down on Sunday as liberation forces met fierce resistance from the militant group's fighters while entering more densely-populated areas of the city.

"This is one of the hardest battles that we've faced till now," said Lieutenant Colonel Muhammad al-Timimi.

Over the weekend, Iraqi forces moved into more densely populated areas of the city without air support from the US-led coalition due to the high-risk of civilian casualties.

"There are a lot of civilians, and we are trying to protect them," al-Timimi noted.

In a rare audio message circulated on Thursday, Abu Bakr al-Baghdadi, the leader of the militant group, ordered his followers to stand their ground and fight.

The tone of his message marked a stark difference to previous speeches, signaling the group's reluctance to flee the city like they have in similar situations.

"There are many different IEDs (improvised explosive devices) that they put in different places, come up with different tactics. Many that are used like networks," Barzani said.

"So in one house, they are putting one IED and trying to hide it. And once it explodes, then the entire neighborhood explodes," he added.

However, despite the growing challenges of fighting the group as Iraqi forces inch their way towards the city center, Barzani pointed to other obstacles.

"The fight against ISIS is going to be a long fight … Not only militarily but also economically, ideologically," he added.

In 2014, the "Islamic State" took over large swathes of land in Iraq and Syria, culminating in the group's capture of Mosul after Iraqi forces fled the city.