FIFA has published its report into the sexual abuse scandal which led to the former head of Haitian football, Yves Jean-Bart, receiving a lifetime ban. In it, the governing body brands the 73-year-old "a disgrace." 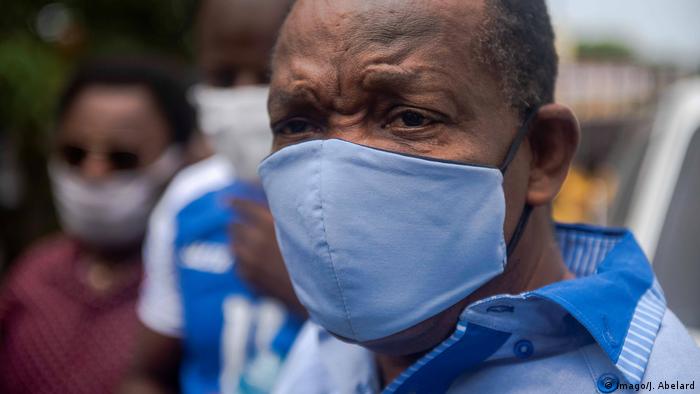 In November, FIFA handed down a lifetime ban from football for Yves "Dadou" Jean-Bart

A report by world football's governing body, FIFA, has laid bare the scale of abuse carried out by Yves "Dadou" Jean-Bart, the disgraced former president of the Haitian football federation (FHF), calling his conduct "appalling" and saying that he had "created a very complex and extremely harmful system of sexual abuse and exploitation of female players."

Jean-Bart was given a lifetime ban from football in November and fined 1 million Swiss francs (€920,000, $1,127,000) after FIFA's ethics committee found him guilty of sexually abusing and harassing young female players at Haiti's national training center in Croix-des-Bouquets, near the capital Port-au-Prince. Some of his victims were underage.

Now, the full legal reasoning behind that decision has been released. It spells out how Jean-Bart took advantage of his position "to coerce or convince the (minor) female players to engage in sexual activity with him, by promising to help or threatening to damage their football careers" – even though he was supposed to be the man ultimately entrusted with their well-being.

The 45-page report catalogues a series of abuses, all following a similar pattern. Jean-Bart would use a supposed hospital visit as a pretext to take a player out of the training center. The player would then be driven to a hotel or another location, where the abuse allegedly occurred.

One victim told investigators: "Mr. Jean-Bart called me on the phone to invite me to his room. When I got to the room, I found him lying in bed. He handed me a bag of panties as a gift. I quickly thanked him so I could go. He called me back and pulled me closer to his body. At that point, he started to touch me. When I realized what was going on, I pushed him and fled the room."

The players who refused Jean-Bart's advances were expelled from the training center and national team. As DW reported in October, Jean-Bart also confiscated their passports as a way of controlling them and preventing them from fleeing abroad.

A second victim cited in the report said: "What I want is to get my passport back and my safety is guaranteed. If Dadou knows that I have testified against him, anything can happen to me and my family, because he knows where he can find me."

Investigators rejected Jean-Bart's argument that the allegations were part of an orchestrated plot to oust him as being "very difficult to conceive." They also cast doubt on his claims that he suffered from a medical condition that meant he was unable to have penetrative sex, saying in any case that "the concept of sexual abuse does not necessarily require coitus."

Nonetheless, investigators found that "the sexual conduct and requests of Mr. Jean-Bart ranged from inappropriate touching, to sexual harassment and abuse and, in the worst case to rape (and forced abortion)."

Evidence supplied by FIFPro, the global players' union, showed how systemic the abuse was, with 34 possible victims and 10 potential perpetrators identified, including 14 potential victims of Jean-Bart.

The report concluded that Jean-Bart's behavior was "simply inexcusable, a disgrace for any football official," adding: "He abused his position in order to satisfy his personal attitude of domination over the most fragile people, destroying the careers and lives of young promising female players."

Jean-Bart was in charge of the FHF for 20 years. Despite the depth of the allegations against him, he continues to maintain his innocence and says he will appeal his lifetime ban to the Court of Arbitration for Sport, the world's highest sports court.

In an interview with the British news website Mail Online last month, Jean-Bart rounded on FIFA for banning him, saying: "I knew I was going to be found guilty no matter what. It was a parody of justice. You have to wonder if they'd do the same thing with the president of the French or Italian federations."

In contrast, the 73-year-old had heaped praise on the decision by a Haitian judge to drop the criminal case against him – a verdict that came just days before his lifetime ban was announced – claiming it "fully cleared" him of any wrongdoing. However, Jean-Bart's joy proved short-lived. After international criticism, the prosecutor in Croix-des-Bouquets has since won an appeal to reopen the investigation.

Reacting to the FIFA report, Evan Nierman, Jean-Bart's spokesman, told DW: "Repeating false and salacious allegations to foreign journalists and a bureaucratic committee within FIFA does not make them true. Because judicial systems and courts of law rely on facts and proof rather than politically motivated rumors, Dr. Jean-Bart believes he will be cleared of wrongdoing when his case is examined before the Court of Arbitration for Sport."

With US authorities also understood to be looking into the case, Jean-Bart's current whereabouts are unknown. It is thought he is in hiding, fearful of being extradited for crimes that he may have committed abroad.