FIFA has brought charges over 36 women who wore the same orange dress to a world cup match - but not against the women wearing the dresses. 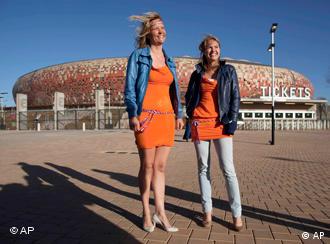 Orange dresses are not allowed by FIFA, at least not in large numbers

FIFA, the international governing association for soccer, has pressed charges against the organizers of a marketing effort in which 36 women dressed in identical orange dresses, ostensibly to promote a Dutch rival to the official World Cup beer.

The women were detained by police during the World Cup match between the Netherlands and Denmark. Two appeared in court and were released on bail, subject to their appearance in court next week.

However, FIFA says it will only bring charges against the Dutch Bavaria brewery which distributed the dresses.

"We have made charges against the organisers of the ambush marketing, not against the young women who were involved. The police is still investigating the case," FIFA spokesman Nicholas Maingot told a press briefing Thursday.

Budweiser is an official sponsor and the only beer company permitted to display its advertising in the stadium - a privilege for which it pays heavily. FIFA is notoriously protective of its lucrative marketing interests.

Fifa also stopped a private South African airline from advertising itself as "The Unofficial National Carrier of the You-Know-What."

It is not the first time the practice of ambush marketing has been an issue at soccer matches: Four years ago in Germany, fans wearing Lederhosen-style pants sponsored by Bavaria beer were told to take off the pants.

Businesses and events at mercy of FIFA's trademark control

Pop quiz: What is the name of the global soccer tournament taking place in Germany this summer? Answer: The FIFA World Cup. You can say it...but you can't wear it. Not without a license anyway. (30.03.2006)

If there was any doubt, this is FIFA's World Cup. World soccer's governing body has assumed almost total control and the German hosts are increasingly pushed aside. There is, not surprisingly, trouble in soccer paradise. (07.06.2006)

From June 9 to July 9, the 12 host cities of the World Cup will firmly be in the grip of FIFA. Not just to promote the sporting event, but also to protect the interests of the World Cup partners and sponsors. (06.02.2006)