Businesses and Events at Mercy of FIFA′s Trademark Control | News and current affairs from Germany and around the world | DW | 30.03.2006

Businesses and Events at Mercy of FIFA's Trademark Control

Pop quiz: What is the name of the global soccer tournament taking place in Germany this summer? Answer: The FIFA World Cup. You can say it...but you can't wear it. Not without a license anyway. 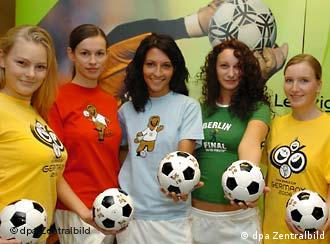 All legal and above board: These models won't have to strip off their official merchandise

Nearly every company in Germany wants to make money on the upcoming World Cup in June. But not everyone is allowed to advertise with the logo. FIFA, world soccer's governing body, has laid down strict criteria for World Cup 2006 slogans and advertising.

While soccer fans are gearing up for the World Cup, the biggest event the sport has to offer, others are dreaming about how to make big bucks from it.

The official sponsors, companies like automaker Hyundai and sports equipment giant Adidas amongst others, are the only ones allowed to use certain trademarks copyrighted by FIFA. And they have certainly paid for the privilege.

These "official" companies have paid around 45 million euros each for exclusive permission to use the World Cup for advertising purposes. In addition, there are the national sponsors like German Railways, Postbank and others who have each paid 13 million euros for the rights, but may only use the World Cup logo for their advertising within Germany.

FIFA believes that the high price for getting on the exclusive list is worth it and that those who intend to use the trademarks without acquiring these rights should be punished. FIFA spokesman Andreas Herren says it is only what official sponsors would expect. "Companies who have acquired these rights of course deserve to be protected against this so-called ‘ambush marketing’ by free-riders."

Those who unofficially use the World Cup to make money face tough consequences. During the 2002 World Cup in Japan/Korea, for instance, FIFA tracked down nearly 2,000 cases of fraud in 88 different countries. Over three million products were confiscated. 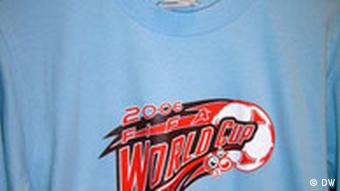 "If someone uses the trademark illegally, say, to print it on t-shirts or baseballs caps to be sold outside the stadiums, then he will face a restraining order and could have to pay damages to FIFA," he says.

Visitors who buy and wear the unlicensed products could be forced by personnel to remove them at the stadiums. However, not only would that mean potentially thousands of semi-naked fans teeming through the turnstiles; it would also infringe on personal rights and freedom of action.

Spectators would have to stand up to the personnel and insist on their right to wear what they want which could lead to confrontation FIFA and the German organizers are eager to avoid.

While FIFA expects businesses across Germany to adhere to its strong-arm trademark policies, it seems that its message has not spread far enough to reach those who may be affected by it. 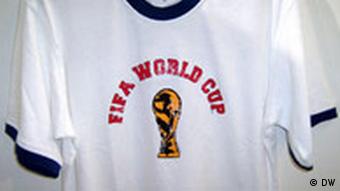 Knock-off merchandise can get traders into trouble

In the Cologne suburb of Vingst, a number of traders were still blissfully unaware that selling unlicensed World Cup products featuring seemingly innocuous slogans such as "World Cup 2006" could land them in hot water with the global soccer body.

"I know these baseball caps are not licensed but I'm not selling them as such," said Achim B., the proprietor of a discount store selling a range of soccer related products. "I'm not trying to con anyone. If they want to pay an extra 20 euros for the real thing, that’s up to them."

When informed that even the slogan "World Cup 06" could contravene FIFA trademark rules, Achim replied, "What else are we going to call it? Soccer World Championships 2006? No one will know what that is? It's the World Cup. Anyway, I'd never be able to fit that on a cap."

"It's just stupid," said another trader who wished to remain anonymous. "What will they do next? Stop us from selling footballs because they have something to do with the World Cup? We'd have to call them 'balls to be kicked by the feet'. People would think I was crazy -- just like FIFA." 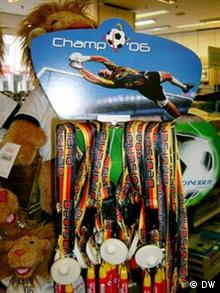 Many companies have gotten around the strict trademark rules by marketing their products under World Cup related headings without actually using the protected brand names. However, the products lack a certain credibility without the World Cup in the title and are perceived as cheap as a result.

Katja Hartmann, the events director with the Phoenix Sports Club near Ostheim, was forced to rename her World Cup opening day festivities in line with FIFA rules.

"We intended to hold our gala on June 9 under the title 'World Cup Festival 2006' but after applying for the necessary licenses we were advised by lawyers that the name could infringe on FIFA trademarks. Unless we were willing to pay lots of money to use it, we had to change the name or go ahead and face the consequences."

"It was not such a big deal to change it but we felt pressured. People should be allowed to celebrate the fact the World Cup is in Germany and call it just that. The World Cup is about the people but it seems that they are being pushed out of the picture in favor of money-making and marketing," she added. "Our 'Cup Fest 06' will go ahead but it has lost its shine a bit."

The world's media is threatening to take legal action against FIFA unless soccer’s governing body lifts the restrictions it has imposed on coverage at this year's World Cup. (Feb. 24, 2006)

The legal row between FIFA and German candy producer, Ferrero over marketing rights during the soccer World Cup in 2006 has now moved to Germany's federal administrative court. (Sept. 22, 2005)