German Hosts Marginalized by FIFA′s Occupying Power | News and current affairs from Germany and around the world | DW | 07.06.2006

If there was any doubt, this is FIFA's World Cup. World soccer's governing body has assumed almost total control and the German hosts are increasingly pushed aside. There is, not surprisingly, trouble in soccer paradise. 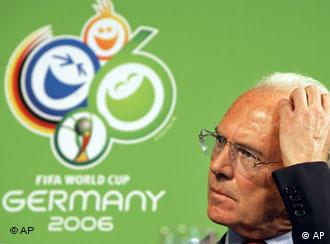 FIFA is laughing all the way to the bank while Beckenbauer and Co. ponder what went wrong

World soccer's governing body FIFA rightly claims to be the creator of the World Cup. In fact, the creation of a world championship soccer tournament was one of the main reasons why FIFA came into being 100 years ago in Zurich. Since then, FIFA has overseen some 17 World Cups and has been the proud observer of some of soccer's most memorable moments.

Despite a rich history and long involvement in the global soccer showpiece, FIFA has only really got its teeth into the business side of the tournament this year. With the 2006 World Cup in Germany, FIFA has gone into marketing and media overdrive.

FIFA's 2006 offensive on the senses and bank balances of soccer fans all over the world has generated annoyance and criticism. How, some argue, can an organization which claims to be committed to the ideals of sports and friendship attached to the World Cup be so concerned with such a massive commercial quest?

And it isn't only the supporters who have taken offense to FIFA's seemingly insatiable hunger for sales and profits. Cracks are forming in its relationship with the German Organizing Committee (OK) as FIFA allegedly pockets millions from the sales of tickets at the expense of fans.

The ticket saga is just the tip of a presumably FIFA-branded iceberg. Merchandise sellers and event organizers have already felt the weight of FIFA's heavy hand when it comes to the use of branded phrases. When a spoof letter recently circulated around Cologne stating that no-one was allowed to wear anything but FIFA approved clothing or sing any unlicensed World Cup song within a certain area on match days, people now accustomed to the organization's control-freakery took it as authentic.

No name too big to fall foul of FIFA 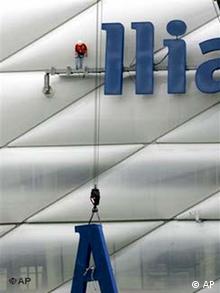 FIFA has developed into a mighty economic enterprise whose influence stretches far beyond the confines of the soccer stadium. Such is its reach that Hamburg's AOL Arena has had to remove its name for the duration of the World Cup, since the computer company is not an official partner, as has Munich's Allianz Arena.

The logo on sportswear giant Nike's headquarters in Frankfurt has also been covered after FIFA took umbrage to it.

FIFA has turned itself into an "occupying power" in Germany, dictating what can and cannot be shown and where. German businesses and politicians are in uproar over FIFA imposed zones around stadiums where only official sponsors can advertise; for example, milk cannot be used on match days in the Coca Cola area.

Considering the amount of money the sponsors have to spend to get this kind of treatment, they should demand nothing less. According to FIFA marketing boss Gregor Lentze, the money generated by the 15 major sponsors is close to 700 million euros ($900 million), all heading into the federation's coffer. It is a marked contrast to the organizations humble beginnings. In 1906, FIFA had an annual turnover of 500 Swiss francs ($411). 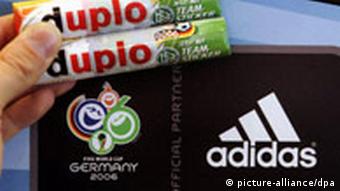 But FIFA has not had it all its own way. Germany's Federal Supreme Court gave the federation the red card when it tried to copyright the phrases "World Cup 2006" and "Football World Cup 2006." This attempt to corner even more of the market was rejected by the court which argued that if such phrases were owned by an organization where would it end?

"One could also apply to protect Christmas or Easter as trade marks," said Götz Jordan of the Duplo confectionary company, which contested FIFA's case.

Despite losing this battle, it looks like FIFA will win the war. Federation President Joseph Blatter is expected to deliver good news at the FIFA congress in Munich on Wednesday, announcing an annual FIFA income of around 1.86 billion euros from the World Cup. While the federation will pocket a substantial sum, it won't take all of the money. Some of that will be paid to the OK and projects supported by FIFA.

Germany's money will then go into paying off its own costs. The German state has put 3.7 billion euros into revamping its infrastructure with 1.5 billion euros going into the modernization of all twelve host stadiums.

The host nation will recoup some more cash from the tourism aspect, with some 3.5 million visitors bumping up the bank balance through hotel fees, fuel costs and value added taxes (VAT). 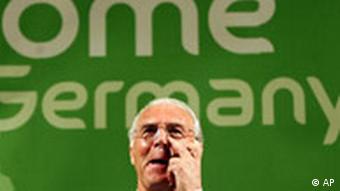 A disguised message to FIFA?

So is the World Cup destined to become an even more bloated cash cow in future years? Not if people like Franz Beckenbauer have anything to do with it. The most prominent member of the OK has criticized the commercial behavior of FIFA and has called for soccer to be "cleaned." German Soccer Association president Theo Zwanziger has said that the marketing of soccer has reached its limits with this World Cup.

It appears that the criticism is starting to get through. FIFA president Blatter reacted to the criticism by announcing a "self imposed restriction" after the World Cup. He announced that FIFA would be looking more towards "optimum" World Cups in future rather than "maximum." The hope is that FIFA will put on more modest events after this World Cup.

Less than a week before the World Cup starts, Sepp Blatter, the head of soccer's world governing body FIFA, has had to fight off accusations that the tournament will be ruined by big business. (June 6, 2006)