Palestinian President Mahmoud Abbas has told the UN General Assembly that there is "no meaning or value" in Middle East peace talks, unless they aim to carve out a Palestinian state without Israeli occupation. 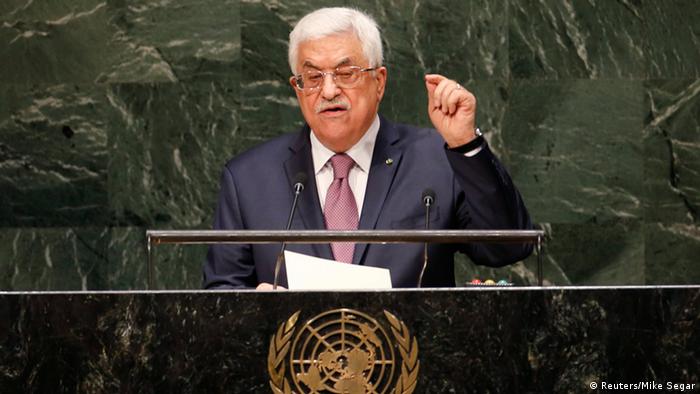 Mahmoud Abbas described the recent Israeli airstrikes against the Gaza Strip as "a war of genocide" in his 30-minute address to the United Nations on Friday. The Palestinian president also said that peace talks with Israel would not work without a "firm timetable" for an independent Palestine.

"There is an occupation that must end now. There are a people that must be freed immediately. The hour of independence of the state of Palestine has arrived," Abbas said. The UN overwhelmingly agreed in 2012 to upgrade the Palestinians' status to "non-member state" from "entity," one step away from full recognition as a UN member.

The address angered the US, which described Abbas' speech in New York as "deeply disappointing" and "counterproductive." Israel's foreign minister, Avigdor Lieberman, accused the Fatah leader of "political terrorism" and "false accusations." 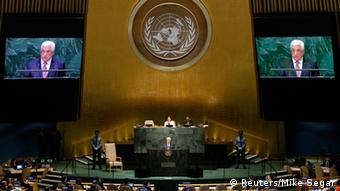 Abbas said that the peace process could not progress unless Israeli settlement building on territory claimed by the Palestinians stopped. Settlement construction continued during the last round of failed peace talks, which collapsed in the run-up the 50-day conflict.

"There is neither credibility nor seriousness in negotiations in which Israel pre-determines the results via its settlement activities," Abbas said. "It's high time for this settlement occupation to end now."

Lieberman said that Friday's "statements to the UN General Assembly clearly demonstrate that [Abbas] doesn't want to be - and cannot be - a partner to a diplomatic settlement." Lieberman said that the Fatah leader based in the West Bank had displayed his proximity to Hamas in the Gaza Strip; Abbas was speaking a day after Hamas and Fatah agreed to reinstate a power-sharing deal in Gaza.

"It isn't for nothing that Abu Mazen is in a joint government with Hamas," Lieberman said, referring to Abbas by his nickname. "Abu Mazen complements Hamas with his political terrorism and storytelling against Israel."

The US government, which had brokered the last round of failed peace talks prior to the war in Gaza, also responded tersely to the Palestinian president's address. 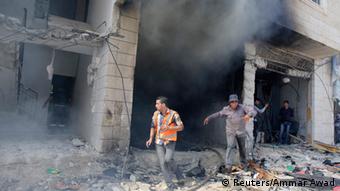 Israel has launched internal investigations against some of its own troops

"President Abbas' speech today included offensive characterizations that were deeply disappointing and which we reject," State Department spokeswoman Jen Psaki said. "Such provocative statements are counterproductive and undermine efforts to create a positive atmosphere and restore trust between the parties."

ICC hint, resolution in the works

Abbas also raised the prospect of seeking war crimes prosecutions after the bombardment of Gaza, albeit without going into specifics. Israel launched thousands of airstrikes against what it said were Hamas-linked targets in Gaza, while militants fired thousands of makeshift rockets back towards Israeli territory. More than 2,100 Palestinians were killed, the majority of them civilians, according to UN figures. Sixty-six Israeli soldiers were killed and six civilians died in Israel during the conflict.

"We will not forget and we will not forgive, and we will not allow war criminals to escape punishment," Abbas said. However, Israel is not a signatory to the Rome Statute, meaning that pressing for war crimes charges against Israeli citizens in the International Criminal Court would likely prove highly challenging. Since its 2012 upgrade to "non-member state" at the UN, however, Palestine is now eligible to sign the ICC agreement; not joining the court was one concession Palestinians offered in return for the last round of failed talks.

Abbas also said on Friday that he was working on a new draft Security Council resolution with Arab countries that would set out a "firm timetable" for statehood, without naming a concrete date. Any such resolution would require either approval or abstention from the US, a permanent member of the Security Council.

Abbas was among the more prominent speakers on the third day of the UN's General Assembly; German and Russian foreign ministers Frank-Walter Steinmeier and Sergey Lavrov are due to speak on Saturday.