Six months after the attempt to launch a European Super League, another new European football tournament started on Wednesday night. Among the participants in the FENIX Trophy are HFC Falke and FC United of Manchester. 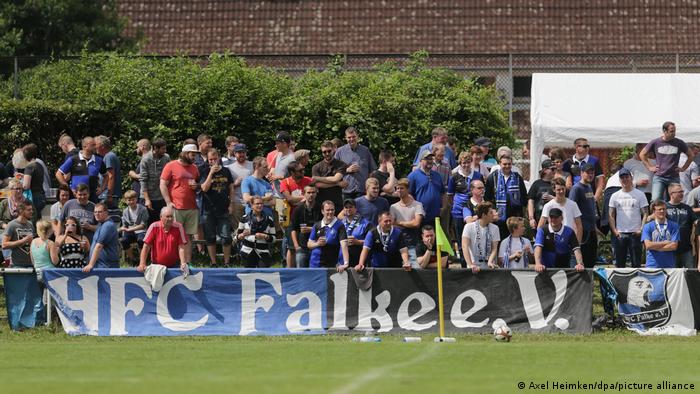 "Make friends, not millionaires," read the banner held up by the players of both Hamburg's HFC Falke and the Czech Republic's Prague Raptors ahead of kickoff Wednesday night. "Let the Fenix fly!"

Though the Super League plans back in April 2021 were immediately condemned as a venture perceived to be driven solely by greed, the FENIX Trophy couldn't be more different.

"For us, the social aspect of football is the most important thing," he said. "The FENIX Trophy isn't a super league, but it is a super competition, with eight clubs who share similar values, united by a total disconnect from commercial football, from sport as a business, and by the thought that it can't go on like this."

FENIX Trophy: Rising from the ashes

The word FENIX is an anagram of F for "friendly," E for "European," N for "nonprofessional," I for "innovative," and X for "xenial," a word derived from the ancient Greek "xenos," meaning hospitality toward strangers and mutual respect for cultural differences. Pronounced "phoenix," the mythical bird is also seen on the tournament's logo, representing a new football rising from the ashes of the old.

According to the tournament initiators, Milan outfit Brera Calcio, the clubs have been chosen for their "exceptional social, historical and cultural distinctiveness ... clubs rebuilt and run by fans, clubs featuring significant social and cultural projects, clubs with extraordinary communication skills. In short, a real European network among 'cult' nonprofessional clubs."

The initial lineup also features several clubs who, in one way or another, have been adversely affected by the extreme commercialization of modern football and the processes that ultimately led to April's fateful attempt to launch a breakaway Super League.

HFC Falke, for example, were founded in 2014 by Hamburg supporters who were opposed to the creation of a separate professional football division at HSV, and now play in Germany's seventh tier. They were assisted at the time by representatives of FC United of Manchester, founded in 2005 by Manchester United supporters opposed to the takeover of their club by the Glazer family, and now also founder members of the FENIX Trophy.

"When you look at the Glazer family's ownership of Manchester United, trying to suck as much money out of football as possible, the Super League was just the natural progression," said Adrian Seddon, chairman of FC United, who play in England's seventh tier.

"Modern football has alienated traditional, working-class fans in many subtle ways, pricing them out, taking terraces away, the atmosphere gone, the game converted to a middle-class event like the theatre, but it's never been thrown in their faces as brazenly as that."

"And then when they described traditional football fans as 'legacy fans,' it's very difficult to be told that you simply don't matter anymore." 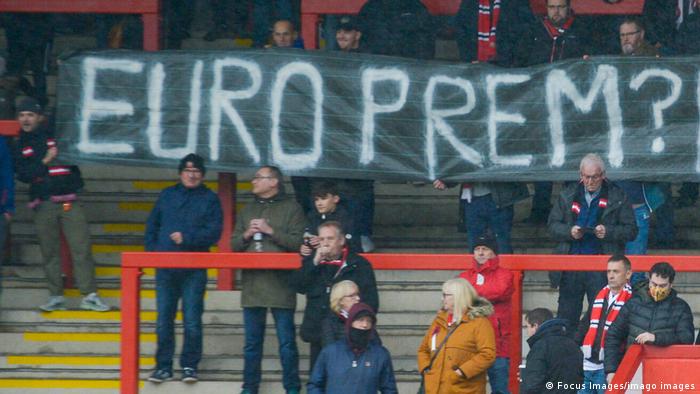 Against modern football: FC United of Manchester supporters oppose the idea of a European Super League

'We don't believe in friendlies!'

FC United have been drawn in Group B alongside 1964 Dutch champions FC DWS from Amsterdam, tournament initiators Brera, considered Milan's third club, and Warsaw community outfit AKS Zly, against whom they will begin their campaign.

HFC Falke and the Prague Raptors, a multi-national club formed in 2017 and committed to diversity and equality, are in Group A with Cuenca Mestallistes, the oldest amateur club in Valencia, and AS Lodigiani, Franceso Totti's former club from Rome.

The group stage will consist of home and away fixtures, before all eight clubs reconvene in Rimini in northeast Italy in June for a final round of games, including a final for the two group winners to determine the champions. And it's serious.

"We don't believe in friendlies!" FC United head coach Neil Reynolds told DW ahead of a recent game, only half in jest.

"Obviously the idea behind the trophy is friendship, but we want to win. No team will be entering the competition not wanting to win it, and we're no different. We want to be the top side in Rimini and then try and defend our title the year after, with more and more teams joining."

Reynold's focus may be on the pitch, but the FENIX Trophy is just as much about demonstrating that, in a game dominated by Financial Fair Play breaches, Champions League reforms, geopolitical sports washing and biennial World Cups, an alternative vision of football is possible.

One key aspect of the tournament is that the home team host their visitors during their stay, keeping costs to a minimum for the amateur clubs and helping to build relationships and promote cultural exchange. Ahead of the inaugural match on Wednesday, for instance, the Falke players showed their visitors from Prague around Hamburg.

On the pitch later that evening, however, new friendships were temporarily put to one side as the football got underway, Prague Raptors running out 2-0 winners. It's the perfect start for them in Group A, but the FENIX Trophy is about more than just the three points.

The plan of 12 elite football clubs to create a Super League has sparked outrage across Europe. But DW's Matt Ford isn't surprised; he saw how the seeds were sown at home in Manchester.

The European Super League project is dead, its founder Andrea Agnelli has admitted. Twelve teams had agreed to join a breakaway Super League but plans collapsed when all six English clubs withdrew. Here is the latest.

The three teams still involved in the breakaway Super League — Real Madrid, Barcelona and Juventus — will face sanctions from UEFA. European football's governing body has reached an agreement with the nine other clubs.