Fears of violence in Thailand over amnesty bill | Asia| An in-depth look at news from across the continent | DW | 07.08.2013

Fears of violence in Thailand over amnesty bill

Thousands of protesters in Thailand are trying to stop the passage of a government bill designed to grant amnesty to political offenders. They fear this could pave the way for the return of former PM Thaksin Shinawatra. 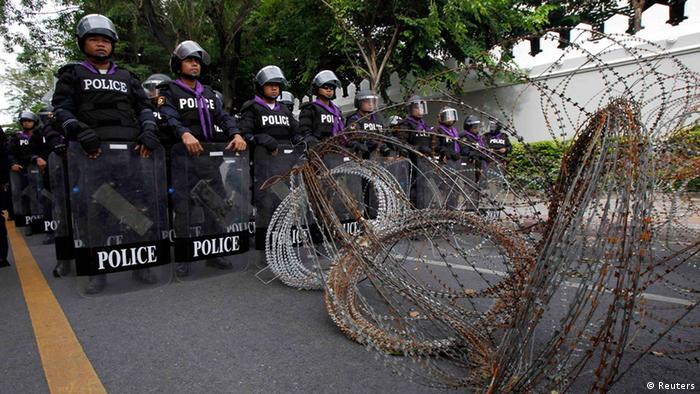 Seven years ago former Thai Prime Minister Thaksin Shinawatra was ousted from power by the military and convicted by the Supreme Court and sentenced to two years imprisonment for abuse of power. The coup was followed by a period of political instability and protests between Thaksin's supporters, who called themselves the "red shirts," and his opponents, the "yellow shirts." The growing tensions culminated in an army crackdown on demonstrators in 2010 which killed nearly a hundred people and injured almost 2,000.

Memories of those turbulent times are still fresh. Recently, a member of the ruling Pheu Thai Party (PTP) presented a bill to parliament aimed at granting amnesty to those involved in the civil unrest. Current Prime Minister Yingluck Shinawatra, Thaksin's youngster sister, says the bill could put an end to the bitter rivalry that has afflicted Thai politics in recent years. 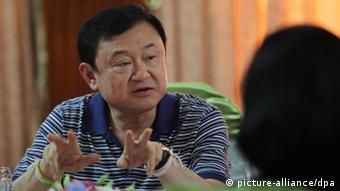 However, opposition parties have decried that the bill would excuse the behavior of soldiers and military leaders accused of malfeasance in 2010 who still haven't been charged. On Wednesday, August 7th, the opposition mobilized several thousand supporters to march on parliament in the capital Bangkok, where the controversial bill was due to be debated over two days.

"We will protest in a peaceful way, take our fight to parliament and do whatever it takes, within the law, to stop this amnesty bill from passing," opposition Democrat party spokesman Chavanond Intarakomalyasut told DW. He emphasized the need for people who committed crimes to serve their jail terms. "People who lost their family members need to know the truth," he added.

Talks 'not likely' to end bloodshed in Thailand

"Peace talks between the Thai government and rebel groups are a step in the right direction," Marco Bünte tells DW. But it is only the very beginning of any kind of peace process between Bangkok and southern separatists. (27.03.2013)

Thailand's government has agreed to hold talks with a Muslim rebel group aimed at ending almost a decade of unrest in the country's south. The deal marks a breakthrough in a conflict that has claimed thousands of lives. (28.02.2013)

Even though the bill excludes Thaksin, opponents view it as an underhanded attempt by the government to pardon him and facilitate his return to Thailand. The former prime minister is currently in exile in Dubai and faces two years in jail for corruption if he returns. "If the bill passes, Thaksin will be included," Intrarakomalaysut said, adding that far from reconciliation, the bill would create another conflict in the country. Thaksin remains popular with Thailand's rural population and the urban poor but is disliked by pro-royalists and the powerful military.

Human rights groups demand that the leaders who ordered the bloody crackdown be excluded from the proposed law along with those who carried out abuses. Brad Adams, Asia director at Human Rights Watch (HRW) says Thailand has a "long-standing culture of impunity." He sees the bill as "an insult to the victims and their families."

A HRW report into the 2010 crackdown on Thaksin supporters concluded that the Thai army used "excessive and unnecessary force," which caused many deaths and injuries. But it also highlighted the role of the so-called "black shirts," an anonymous group of militants, who it says were behind attacks on soldiers, police and civilians.

"The key is having a thorough, professional and independent investigation into the actions of the black shirts; and based on the evidence uncovered, prosecute those responsible," Adams told DW. "The problem is the Yingluck Shinawatra government is denying the black shirts even existed, despite plenty of video and photographic evidence to the contrary."

The government has imposed the so-called Internal Security Act in many parts of the capital. This allows police to use tear gas and water cannon to disperse the crowds, impose curfews and take action against security threats. The wider police powers will remain in place until Saturday, August 10th. 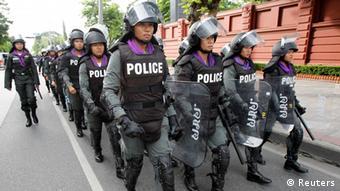 Around 30,000 police and military personnel have been mobilized

Moreover, journalists covering the protests were issued with green armbands so that they can be clearly identified in large crowds of demonstrators. The government wants to avoid a repeat of the 2010 crackdown where one army shot dead one journalist and injured several others.

However, the measure has led to fears of a new crackdown on protesters and even another military coup. Authorities have summoned several people accused of spreading such fear on social media. One of them is the political editor of a local TV channel who warned the public to hoard food and water on his Facebook page. Just in case the protests get out of hand, around 30,000 police and military personnel have been mobilized.