Thailand's government has agreed to hold talks with a Muslim rebel group aimed at ending almost a decade of unrest in the country's south. The deal marks a breakthrough in a conflict that has claimed thousands of lives. 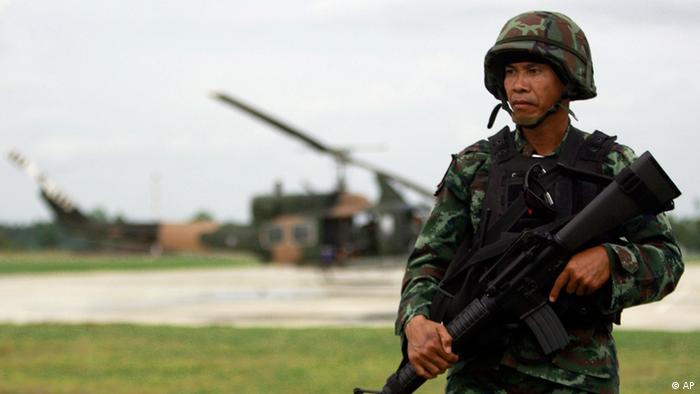 Senior Thai security officials signed the first-ever agreement with the Barisan Revolusi Nasional (BRN) group in the Malaysian capital, Kuala Lumpur, on Thursday, paving the way for talks to begin.

Signed by Lieutenant-General Paradorn Pattanathabutr, secretary-general of Thailand's National Security Council, and Hassan Taib of the BRN, the document launches a "dialogue process" for peace in the Muslim-majority southern border provinces.

No schedule was given for future meetings, however, and no further details were revealed.

The deal came ahead of an annual meeting later on Thursday between Malaysian Prime Minister Najib Razak and his Thai counterpart, Yingluck Shinawatra. The talks are likely to focus on the possibility of Malaysia hosting further negotiations with the rebel group. Malaysia, whose northern states border Thailand, has acted as a facilitator to bring Thai rebel groups to the table and appears ready to play an ongoing mediation role.

Barisan Revolusi Nasional, which in Malay means "National Revolutionary Front", is one of several groups blamed for the unrest in Thailand that has claimed the lives of more than 5,000 people since an Islamic insurgency broke out nine years ago.

Resistance to Bangkok's Buddhist rule has existed for decades in the predominantly Muslim provinces, but after a brief period of quiet it re-emerged violently in January 2004.

Earlier this month 16 insurgents were killed in an attack on a Thai marine base. Rebels responded with a series of counter-attacks including an explosion in Pattani province that killed two security volunteers.