Fear still influences attitudes toward Muslims in Europe | World| Breaking news and perspectives from around the globe | DW | 09.12.2009

The recent Swiss vote to ban minarets has highlighted the fact that many Europeans see Islam as a threat, although the reasons for that are not easy to pinpoint. Muslims have an easier time of it in the United States. 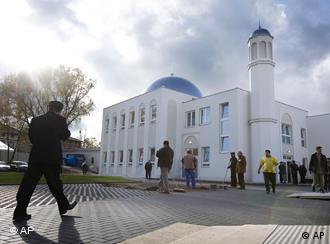 Since the Swiss voted in a November referendum to prohibit the building of new minarets in their country, the debate over Islam and Muslims and their place in Europe has been reopened. The discussion has confirmed suspicions that instead of moving toward peaceful coexistence, a basic mistrust and even rejection of Islam and its adherents are growing.

A pattern has begun to emerge in the reactions in several European countries to the minaret issue. In Germany, the Netherlands, Great Britain or France, the dismay of one commentator was usually countered by another who was seemingly sympathetic to the Swiss decision, and expressed the need "to understand the fears of the population," which felt itself being slowly dominated by Islam.

But to understand these perceptions, one has to look more closely at the numbers. France, the country with the largest Muslim minority, has around four million adherents who make up just over six percent of the total population. In the UK that number is just under three percent and in Germany, Muslims make up, at most, five percent of society.

"What kind of self-confidence must the Christian majority have to have so much fear of five percent of the people who live here?" asked talk show host Michel Friedmann in a television discussion of the subject.

"Anyway, most of those five percent are honest, bourgeois, boring and sweet - just like their German Christian neighbors," he said.

Fear and the unknown

But anxiety about the unknown, and fears of other religions, are strong psychological forces, especially as radicals on both sides have been largely successful in associating Islam with violence and destruction, especially since September 11, 2001.

Ignorance of Islam has led many to confound terms such as "Islam" with "Islamism" and identify the religion with terrorism or at least with a lack of respect for human rights. Many are of the view that the "Christian West" needs to be protected from a slow, but definite attempt by Muslims to "Islamify" it. 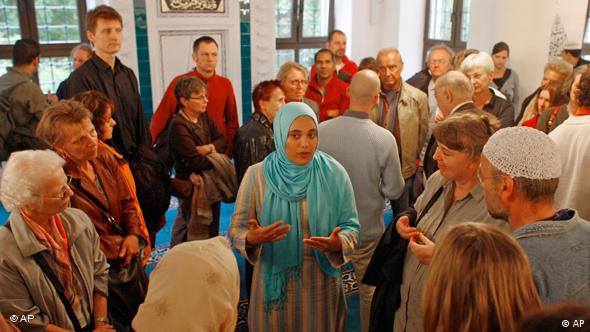 Observers say a lack of knowlege about Islam feeds the fear

"The problem is that people see their Muslim neighbors as emissaries of Islamic countries, which is not the case," said Aiman Mazyek, general secretary of the Central Council of Muslims in Germany. "(Muslims here) are German citizens with all the rights and responsibilities of other citizens, be they Christian, Jewish or atheist."

In Switzerland it was minarets; in Germany the building of mosques has been controversial and has shown how much many people seem to fear even the sight of a house of worship they did not grow up with.

The bigger the building, the bigger the fear of Islam's alleged aims of dominating Europe, the thinking goes. Add to that the statements by radical Muslims expressing plans to make Islam the dominant religion in Europe and to replace democracy with Sharia law. Such words are eagerly seized upon by anti-Muslim radicals and given as much exposure as possible.

"Of course there are a few crazy people out there who continue to try to use religion for their own purposes. But, please, we need to look at how big a group this really is," said Mazyek

One indicator of Muslims' alleged desire for dominance in many Europeans' eyes is the unwillingness of Muslims to integrate fully, but rather to remain separate and live as part of a "parallel society." That can quickly lead to talk in anti-Muslim circles about Europe's "dominant culture," which they say Muslims had better hurry up and embrace.

In the Netherlands, the chairman of the right-wing Freedom party, Geert Wilders, has excelled in this area of argumentation. According to him, the day is not far away when Muslims will make up 30 to 40 percent of the population in Europe, changing the continent forever. Wilders wants to prevent that, he says, by openly threatening those who do not integrate with deportation. 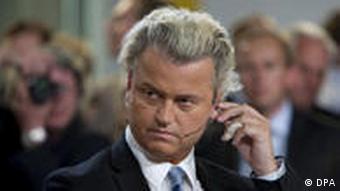 "I have a very clear message. If you abide by our values, by our rule of law, by our constitution, you are very welcome to stay, you are equal as anybody else, we will even help you," he said. "But if you don't, if you commit a crime, if you start thinking about jihad or Sharia, then it's very clear we will send you away, we will send you packing."

Read more about Europe's concerns over a growing Islamic influence

Stark commentary like this is finding a more receptive audience in Europe, even though these kinds of statements by politicians are still fairly rare. Others have begun to openly acknowledge that Muslims, once considered "guest workers" in Germany and Holland, have now become integral parts of the society.

"Muslims do not pose a threat to us and we want them to feel at home in our country," said former German Interior Minister Wolfgang Schaeuble. "But that also means that they accept our way of life, the equality between men and women and the way women and girls live here."

The minaret ban and comments by right-wing politicians have raised real fears in Muslim communities.

"Latent Islamophobia is growing here in Germany," Burhan Kesici, the vice president of the Islamic Federation Berlin, told journalists during a recent tour of some of Berlin's mosques held in the wake of the Swiss minaret vote.

As a result, he said, some Muslim congregations have been retreating from the majority society, living and socializing only among their peers, and thereby strengthening the feared "parallel societies." Some Germans fear such parallel structures are firmly established in the country's big cities, which they see as breeding grounds for crime, extremism and human-rights abuses. 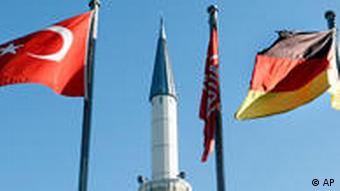 "Parallel societies" are the result of the failure of integration

While calls go out for Muslims to integrate, Muslims themselves are also calling on Europeans to consider them as real parts of society and treat them accordingly.

Berlin is home to some 80 mosques, but only five of them are recognizable as such because they have minarets. The other 75 are located in community halls and buildings in industrial districts. Younger Muslims, in particular, no longer understand why mosques and prayer rooms are hidden away in courtyards.

"I don't think it's good that we have to be so hidden away in this society," said one young Berlin resident. "I am a German Muslim and would love to see a prayer house in Germany from the street and be able to say, there's a German mosque, there's my mosque."

Across the pond, things are somewhat different.

For Khalid Ikbal, a restaurant owner who emigrated to the United States from Yemen, his religion doesn't impede at all on his other identity, of which he is proud: American.

"When you live in America, you're an American," he said.

Ikbal, 50, is a member of one of the biggest Muslim communities in Virginia and his ability to combine both his Muslim identity with that of his new homeland is more common in the US than it is in Europe. 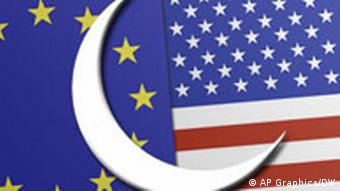 One of the reasons may be the American melting-pot tradition, but another is financial. Economically, many Muslims in the US, both immigrants and native-born, are better off than non-Muslims. Most Muslims in the US are homeowners and in many cases have a higher level of education than the average American.

"Muslims in the US have a very privileged life," said Rena Aslan, sociologist at Harvard University.

The high income and education levels of American Muslims differentiates them from their co-religionists in the Middle East, and especially in Europe, the Islam expert said. In countries like Germany, Switzerland and France, Muslim communities come up against more prejudice and fear of Islam than they do in the US.

But Muslims in the US do face problems of perception, especially since the attacks of September 11, 2001.

Muslims who have a Middle Eastern appearance or names that sound like they come from the region can have a more difficult time at airports. Surveys show that American attitudes toward Muslims have changed little in the eight years that have passed since New York's World Trade Center fell. Around 50 percent of Americans think of Islam as a declaration of war and Muslims as terrorists.

"Sixty percent of Americans think they have never met a Muslim," said Aslan, although he thinks that is very unlikely.

There was surprise, if not shock, as the people of Switzerland voted in a referendum by a large majority to ban the building of mosque minarets. (30.11.2009)