A massive oversupply of powdered milk, coupled with an end to limits on regular EU milk production, has sent the market price plunging in recent years. 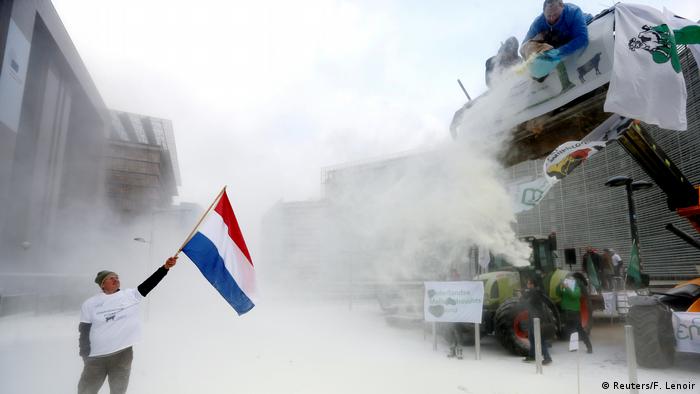 Dozens of farmers from Belgium, Germany, France, the Netherlands and Lithuania descended on the headquarters as agriculture ministers met inside. Using a powerful spray gun from the back of a tractor they turned the European Council building a snowy white.

The European Commission, the executive arm of the 28-nation EU, decided in November to put a small stock of milk powder on sale. They planned to sell 22,500 tons, or 6 percent, of the 355,000 tons of powdered milk in stock.

The EU maintained that it would not sell the milk at any price but following "encouraging signals about a pickup in the milk market," they put some of the stock up for sale. 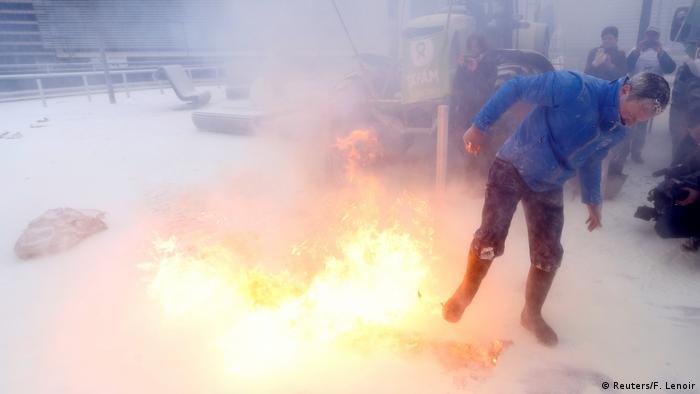 But farmers have been struggling - some nearing bankruptcy - with collapsing milk prices and opposed any sale.

"It's a sharp reminder that the main problem has not been resolved," said protester Henri Lecloux, a member of farm campaign groups Via Campesina and MAP.

"For many producers, the situation is increasingly a question of survival," Sieta van Keimpema, vice president of the European Milk Board, which organized the protest, said in a statement.

Without quotas, prices have dipped

Many dairy farmers work long hours though their pay is dropping and a growing number of farms are going bankrupt. They have a low opinion of subsidies. DW's Jan Walter spoke to a dairy farmer in western Germany. (29.05.2016)

European Union milk quotas have been lifted after more than three decades, prompting predictions ranging from "chronic price collapses are inevitable" through to dairy farmers being "freed from the costs of the quota." (01.04.2015)

The EU's heavily-subsidized farmers have held a series of often messy demonstrations in Brussels in recent years in protest against plunging food prices and soaring costs, which they say are killing their livelihoods.

The EC has approved some support measures over the past year, but the farmers fear that releasing more milk powder into the market will worsen their plight.

The EU eliminated a complicated milk quota system in April 2015, allowing for an increase in production at a time when sanctions against Russia had also hit the industry. Major producers like Germany and Ireland welcomed the move at the time, saying it would help Europe compete in the growing export market to Asia. But smaller farmers argued that it was likely to push prices down and favor larger businesses and farms.

"Our farmers have been so rattled by the crisis that only a real price increase and long-term stability in the market can save milk production across the EU from extinction," said Erwin Schopges, a leader of the European Milk Board alliance of dairy farmers.

In German supermarkets, a liter of fresh milk tends to cost around 0.55 euros, roughly the same as a one-liter bottle of a premium brand mineral water - although discount water remains much cheaper.