Ultra-right activists broke windows and reportedly used tear gas on police outside a hotel where the European Lesbian Conference will take place. Despite threats, conference organizers said they would not be intimidated. 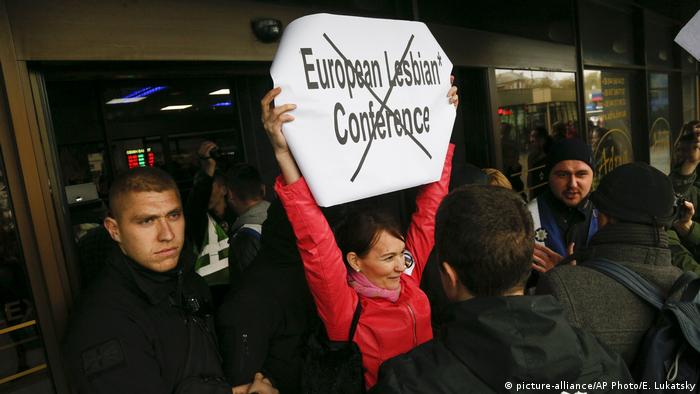 Dozens of protesters from extreme-right groups sought to disrupt the upcoming European Lesbian Conference at a hotel in Kyiv on Thursday.

Although the conference isn't due to officially kick off until Friday, ultra-right activists have been targeting the hotel for several days.

Oksana Pokalchuk, the director of Amnesty International Ukraine, posted pictures on Twitter of broken windows at the hotel and "homophobic threats" that were written on the walls.

On Thursday, protesters picketed the hotel, carrying signs with homophobic slogans, including "We are against gays" and "Go back to hell, sodomites."

Some of the far-right activists tried to break through security cordons and used tear gas on the guards on Thursday, the Associated Press reported.

Ukraine's ultra-right groups have become increasingly aggressive and are known for acts of violence and intimidation at LGBT and women's rights events.

'Love is stronger than hate'

Despite the threats from the far-right groups, organizers of the European Lesbian Conference were determined to carry on with the conference as planned.

"We will not be intimidated and frightened," they said.

News of the protests sparked outrage, as well as an outpouring of support from politicians and rights groups across Europe.

"Love is stronger than hate," Josefine Paul, a German lawmaker in the North Rhine-Westphalia state parliament, wrote on Twitter.

"This conference is an important sign of lesbian visibility and for an open and united Europe," she added.

The Swiss and French embassies in Kyiv also voiced their support of the conference, with both urging Ukrainian authorities to "take all the necessary measures" to ensure security.

Ukrainian authorities have been criticized in the past by rights groups for failing to track down and investigate ultra-right activists.

Hundreds of participants are expected to take part in the European Lesbian Conference in Kyiv, which runs from Friday to Sunday.

A far-right paramilitary group threatened a "bloodbath" at the gay pride parade in Kyiv on Sunday. The activists won't be intimidated, however, and will be protected by police. (10.06.2016)

The transitional government in Kyiv faces major challenges. The West supports the new government while Russia calls it fascist and illegitimate. But who are the new ministers in the Ukraine government? (26.03.2014)