Fact check: Was a 16-year-old Russian beaten to death by a group of Ukrainians in Germany? | Germany | News and in-depth reporting from Berlin and beyond | DW | 21.03.2022

Fact check: Was a 16-year-old Russian beaten to death by a group of Ukrainians in Germany?

The claim that a Russian youth was beaten to death by a "mob of Ukrainian refugees" in the German city of Euskirchen was published in a video addressing Russians in Germany. However, the incident never happened. 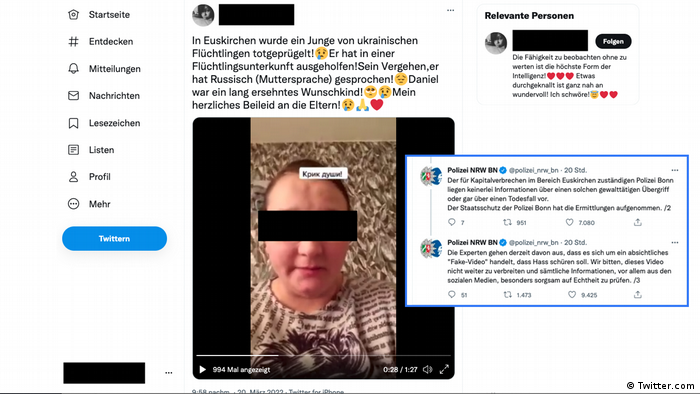 Claim: "In the city of Euskirchen near Cologne, at the train station, a boy was beaten up."

In the video, a woman recounts in Russian the alleged events in the video, describing how a 16-year-old was severely beaten into a coma. The women admits that she does not know the boy personally, but that a friend told her about it.

In the video, translated by DW's Russian Service, she claims that "in the city of Euskirchen near Cologne, at the train station, a boy was beaten up. A group of Ukrainians beat him up half to death — so that he was taken to intensive care. He was in a coma. These bastards were simply taken by the police to the home where they lived. So far nothing has been done to them."

In a tweet, the police in Bonn said there was no such incident in Euskirchen or the vicinity that could be connected to the events described in the video.

"The Bonn police, who are responsible for capital crimes in the Euskirchen area, have no information about such a violent assault or even about a fatality. The Bonn police's State Protection Service has taken up the investigation. The experts currently assume that it is a deliberate ‘fake video' intended to incite hatred," a police statement read.

Simon Rott, a press spokesman for the Bonn police, told DW that there was "no such incident" or any other similar attack in Euskirchen.

"We are currently investigating the identity and background of the woman in question," he said, also confirming that the police together with the public prosecutor's office are examining whether the case has "any relevance under criminal law."

The news portal T-online has described her as "Putin's infowarrior." She currently works for Russian state media, reporting from the self-declared "People's Republic" of Donetsk, and describes herself as a "peace journalist."

On Monday, a second video surfaced in which the woman in the first video who described the alleged incident appears to be apologizing for her claims, saying: "Today I found out that it is a fake."

"I want to apologize to everyone who has seen my video for not turning out to be the truth. I wanted to ask today when the funeral will take place and found out that it had all been lies," she says in the video. She goes on to recount that the person she mentioned in the first video who told her about the alleged attack "hates Ukrainians and decided to harm them through this story."

She says that she believed the story because Russians in Germany are being harassed because of the war in Ukraine. "I believed with all my heart that I didn't need facts, pictures or confirmation. I want you not to repeat my mistake. Don't trust anyone without having seen confirmation. I don't know myself right now whether to believe videos in TikTok or not — what is fake and what is not — when I myself fell into this trap."

Fact check: 5 fakes of the war in Ukraine

Marina Ovsyannikova, famous for interrupting a Russian state TV news broadcast to protest the war in Ukraine, is now facing criminal charges for further protests against the Kremlin. She appeared in court on Wednesday, following police raids on her home.