Fact check: Did Greta Thunberg demand everyone drive electric cars? | World | Breaking news and perspectives from around the globe | DW | 23.06.2022 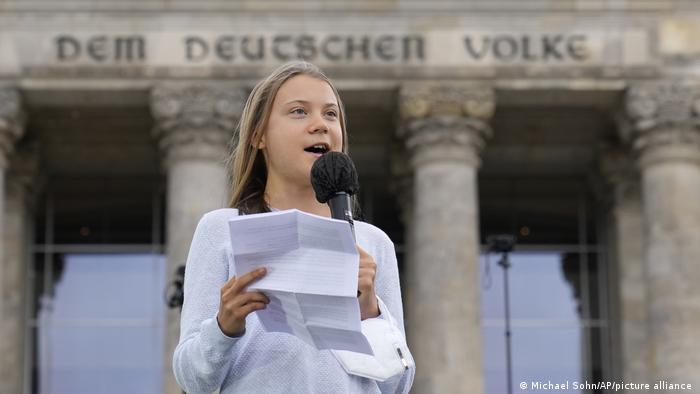 Greta Thunberg did not demand that everyone drive an electric car

Misattributed and fabricated quotes can be found online far too often. They're commonly disseminated to ridicule or discredit political adversaries. Recently, a photo montage has been circulating on social media showing Swedish climate activist Greta Thunberg holding a speech with a superimposed text reading: "I demand everyone drive electric cars now!"

The lower half of the collage shows a child looking into the camera, arms and T-shirt caked in mud. In the background, people work in muddy water. Text superimposed over this part reads: "We're mining the cobalt for your batteries as fast as we can, Greta."

Over 70% of cobalt for batteries is mined in the Democratic Republic of Congo. 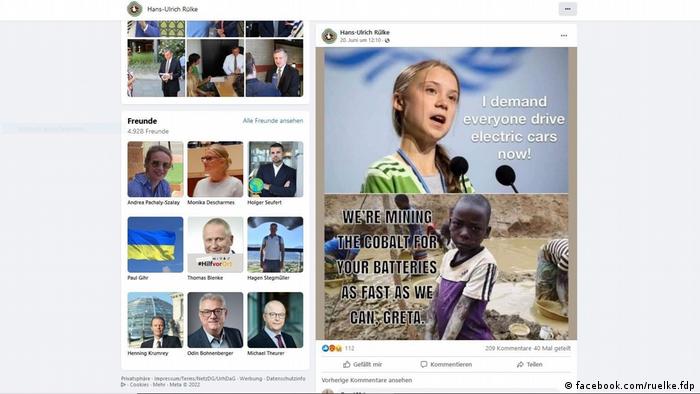 This montage was posted by German lawmaker Hans-Ulrich Rülke on Monday to his Facebook page. Rülke heads the liberal democratic FDP parliamentary group in Germany's southwestern state of Baden-Württemberg.

Claim: Greta Thunberg held a speech in which she said: "I demand everyone drive electric cars now!"

The image in the top half of the montage shows Greta Thunberg speaking at the 2019 UN Climate Change conference COP25 in Madrid, Spain. During her talk, Thunberg implored the world to drastically cut greenhouse emissions, yet at no point said "I demand everyone drive electric cars now," let alone mention electric cars. Her full speech is available on YouTube. The electric car quote has been fabricated and falsely attributed to the climate activist.

A reverse picture search using TinEye reveals the montage was already posted on the Reddit discussion forum on 23 November 2021. It was shared in the "r/cursedcomments" sub-forum, which invites users to post content that will leave readers "mystified" but also put a "smile on your face." The post has since been removed by moderators.

It is possible the content featuring Thunberg's fabricated quote was originally created and shared for entertainment, rather than disinformation purposes. It appears the montage was later, however, picked up and shared by others to discredit the climate activist.

A TinEye search reveals the lower half of the montage showing an African child along with miners working in the background was first published on 29 November, 2014, to Indonesian news platform www.liputan6.com.

Although Rülke's post has sparked considerable controversy, he has not removed it from his Facebook page. Speaking to German daily Rhein-Neckar-Zeitung, Rülke on Thursday defended sharing the montage, saying "I did not create the post, I merely shared it. Posts of this kind are always exaggerations. The aim was to draw greater attention to inhumane child labor in Congo." Asked why he had shared a fake and falsely attributed quote of Greta Thunberg, Rülke replied the climate activist had "ridden electric cars in the US" which had attracted "great media attention."

This is not the first time Thunberg has been targeted by disinformation campaigns.