Greece's parliament has approved a raft of fresh austerity imposed by international creditors. Prime Minister Alexis Tsipras had faced down detractors in his leftist Syriza government in the run-up to the vote. 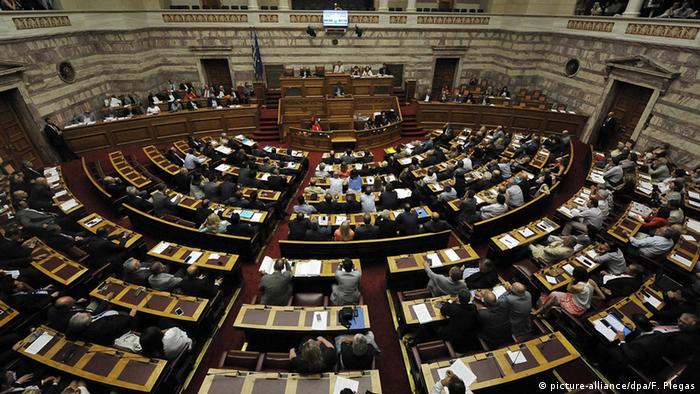 On Thursday, Greece's parliament passed new austerity measures sought by creditors. The Syriza government had come to power in January on pledges of putting a stop to five years of austerity imposed from abroad.

"We don't believe in it," Prime Minister Alexis Tsipras said ahead of the vote early Thursday, "but we are forced to adopt it."

Thousands took to the streets to protest ahead of the vote. Demonstrators waved banners reading "Cancel the bailout!" and "No to the policies of the EU, the ECB and the IMF." Pharmacists pulled down their shutters across Greece and civil servants walked off their jobs in protest in a 24-hour strike.

In a July 5 referendum, over 60 percent of Greeks had rejected a previous credit-for-austerity plan offered by international lenders.

The new agreement would require tax hikes and pension cuts in a country where unemployment has jumped above 25 percent during five years of austerity. The economy has shrunk by a quarter in the course of two previous credit packages.

Ahead of the vote, at least 30 Syriza lawmakers had announced that they would oppose the deal. However, Tsipras had already told Greek television that he would "take decisions and not run away" from last Monday's bailout deal reached with creditors in Brussels designed to avoid Greece's losing the euro as its currency.

Hours earlier, the new credit package was backed by both houses of the French parliament. Prime Minister Manuel Valls said the austerity demanded of Greece was "normal" and the credit package - Greece's third in five years - was the only route of the deadlock. Valls described past talk of a Greek eurozone exit or "Grexit" as an "old, absurd and dangerous idea."

On Wednesday, Christine Lagarde, the managing director of the International Monetary Fund, said Greece's creditors had moved more closely to the idea of restructuring the country's massive debt. "I have some hope, because as late as a couple of hours ago, I understand that there were some more positive noises towards that principle of debt restructuring," she told CNN International in an interview.

The standoff has disrupted trade between Greece and Germany, where leaders have called most vocally for austerity. Though official calls for deeper cuts have played well in Germany, they also face international backlash.