Facebook ad boycott: A chance to stop hate or just another PR campaign? | Business | Economy and finance news from a German perspective | DW | 07.07.2020

Some of the world's biggest brands have pulled their advertising from Facebook in the fight against hate speech. Do these boycotts work or just allow multinationals to appear ultravirtuous? 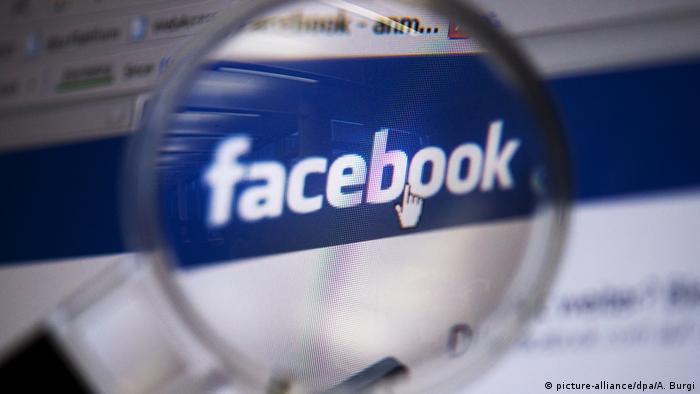 Starbucks, Microsoft, Unilever, Volkswagen and Coca-Cola are among hundreds of companies that have temporarily withdrawn their advertising from Facebook to try to pressure the social media giant to do more to stamp out extremist content.

The Stop Hate for Profit campaign, created by several activist groups, has quickly gained traction by singling out Facebook for censure. The campaign website accuses the platform of allowing the proliferation of violent, racist, homophobic and anti-Semitic content.

Mark Zuckerberg's firm was recently criticized for not removing a post by US President Donald Trump linked to the protests that erupted in the wake of the police killing of Black American George Floyd. While Twitter restricted it, the post which stated: "When the looting starts, the shooting starts," remained visible on Facebook.

"The [Facebook] boycott has forced big brands to reconsider the core of their advertising strategy," Nandini Jammi, co-founder of the activist group Sleeping Giants, told DW. She said firms are being made to question the real-world consequences of their ad spends and whether they can market their brands in a way that isn't harmful to society.

Over the past four years, Sleeping Giants has been successful in persuading thousands of companies to remove their ads from conservative news outlets, including Breitbart, whose content is considered to have often included intentionally misleading and bigoted stories.

How best to respond?

The Black Lives Matter (BLM) protests will have also influenced companies to commit to pausing their Facebook ads, at least for July. The sheer scale of public anger has left many CEOs struggling to answer for racial injustice within their corporations and the boycott offers a very visible opportunity for them to be seen to be making amends.

Firms that pulled their ads have benefited from extensive media coverage. New articles are written each time a brand like The North Face, Levis Strauss and Absolute Vodka announce their Facebook pause. Earlier this week, a group of UK charities merely threatened to pull their Facebook advertising and that was enough to give them positive exposure.

The boycott can be also seen as part of a wider phenomenon where brands have in recent years sought to profit from taking a stand on political issues, such as climate change and LGBT+ rights. "A lot of brands are finding it lucrative to take a political stand," said communication and public relations scholar Melissa Aronczyk. She said companies will "capitalize on issues if it appears as a zeitgeist, especially to younger consumers."

Research shows that some consumers are more emotionally connected to purpose-driven brands, and at least in surveys, say they would switch to a brand that aligns itself more with their values. Some advertising industry executives, however, question whether this benefits the bottom line and if the Facebook boycott will be any different. 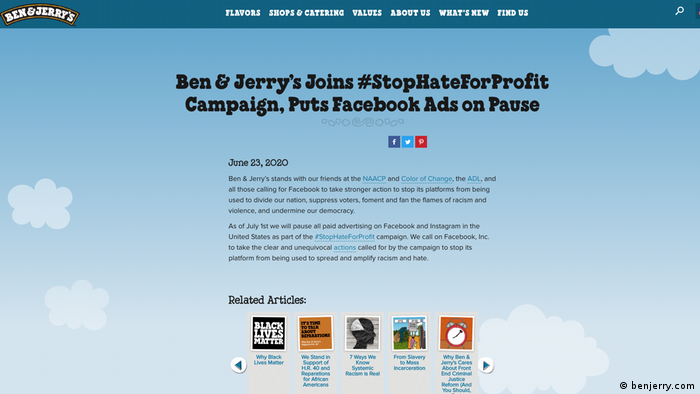 "There's no evidence whatsoever that brands who don't get involved in political issues are going to directly lose any sales. It's more internal pressure from PR teams to make sure companies are seen to be doing the right thing," London-based media and advertising analyst Ivan Clark told DW.

Aronczyk, an associate professor at Rutgers University, also cautioned consumers over what she said was "lip service" by powerful multinational companies in shunning Facebook for a month. "Though brands are clearly political actors with tremendous power to influence public policy, they are not acting in the public interest. They are acting first and foremost in their shareholders' interests," she told DW.

Jammi is more hopeful that the boycott has "kickstarted really important conversations," adding that a lot of companies had not until now made the connection about how their ad budgets enable hate and disinformation. "I believe we're seeing the beginning of a permanent shift in the way companies spend," the activist told DW.

Facebook has, so far, taken the boycott in its stride. Last week, Zuckerberg downplayed its impact, saying the platform would not change its policies because of what he said was a "threat to a small percent of our advertising revenue." The company insists it has taken measures to reduce the amount of extremist content being served to users.

While the activist groups have generated a lot of publicity, they've yet to hit the social media giant where it hurts. Research carried out by Pathmatics on behalf of CNN Business found most of Facebook's top 100 advertisers have not joined the boycott. The research firm calculated that even if all 100 firms took part, the boycott would impact just 6% of the social media giant's revenues. After all, Facebook has 7 million active advertisers, and most of its $69.7 billion (61.75 billion) revenue in 2019 came from small and medium-sized firms, not the mega-corporations.

"It's easy to stir up a bit of noise on social media," Clark said, adding that Facebook was merely part of the mix of advertising solutions for big brands, and that they would quickly end their boycotts.

Advertising sector pundits have noted that the value companies are enjoying from the positive PR may be worth more than the budget they had committed to spending on Facebook in July — a double win. However, they say, while activism allows firms to appear virtuous, their stunts can sometimes backfire.

In 2015, Starbucks became a laughing stock after launching the 'Race Together' initiative to expand the conversation on racial inequality in the US. The coffee retailer was lambasted for not focusing on its diversity issues, and by having its white billionaire CEO front the campaign. Two years later, Pepsi's 'Live for Now' commercial was accused of capitalizing on the BLM protests by featuring Kendall Jenner at a protest, handing a can of the soft drink to a police officer.

Asked whether there could be blowback against activists groups if they are seen to put too much pressure on corporate America, Aronczyk said there have already been attempts by companies to silence them by use of so-called SLAPP lawsuits, which burdens activists with the cost of a legal defense until they abandon their criticism.

She told DW: "Baseless and expensive lawsuits by corporate actors are just one more example of how most large corporations and their brands are not truly committed to progressive political and social causes. They are instead deeply invested in the status quo."