Multiple witnesses have reported explosions and artillery fire in eastern Ukraine. This comes a day after Ukrainian forces and pro-Russian rebels declared a ceasefire. 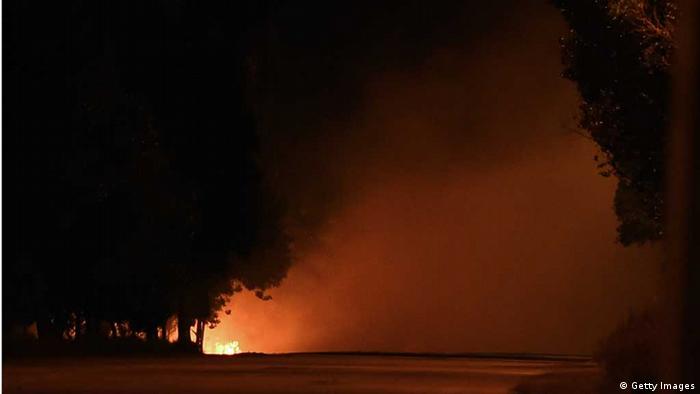 Numerous loud explosions were reported outside the Ukrainian port city of Mariupol late Saturday and into the early hours of Sunday . An AFP journalist in the area reported that a checkpoint held by Ukraine loyalists seemed to be on fire.

A volunteer battalion of Ukrainian fighters has said that Grad rockets were being fired at its positions, but gave no further details.

The sustained explosions were reported just a day after a fragile ceasefire was declared.

In a telephone call on Saturday, Russian President Vladimir Putin and his Ukrainian counterpart Petro Poroshenko agreed that a truce in eastern Ukraine was holding.

Poroshenko's office released a statement saying, "[The two leaders] also stressed the need for the maximum involvement of the Organization for Security and Cooperation in Europe (OSCE) in monitoring the situation... and for cooperation in providing Ukrainian and international humanitarian help."

The ceasefire in Ukraine's east largely held back further conflict on Saturday, however, the truce appeared fragile with claims from both sides that the other had violated the agreement.

A spokesman for Ukraine's national security council, Colonel Andriy Lysenko, told reporters that rebels had fired at Ukrainian forces on 10 occasions after the ceasefire was to take effect, but that all of the incidents took place on Friday night.

Early Saturday, the mayor's office in the eastern city of Donetsk said there had been no reports of shooting or shelling in the area that day, although some shelling had been heard late Friday afternoon.

The city council of the second-largest rebel-held city of Luhansk, which has endured intense fighting for weeks, also reported a quiet night.

Western leaders had voiced skepticism over Russia's commitment to the deal struck in Minsk.

Speaking at the close of a two-day NATO summit in Wales, US President Barack Obama said Friday he was unsure whether rebels would honor the truce, and also whether Russia would stop violating Ukraine's sovereignty and territorial integrity.

Both the US and the EU have prepared even tougher sanctions on Moscow - Obama stressed the most effective way to ensure the ceasefire's success was to move ahead with the fresh measures.

"If certain processes get underway, we are prepared to suspend sanctions against Russia," German Chancellor Angela Merkel said Friday.

Ukraine, NATO and Western nations have accused Russia of backing the separatists with weapons, supplies and thousands of troops, charges which Moscow has continued to deny.

The Ukraine crisis has provoked plenty of historical comparisons. Will there be another war in Europe, as in 1914? Or is it more like 1939? In this case, history is only partly helpful, says DW's Christian F. Trippe. (06.09.2014)