Explosions in Istanbul and Sarikamis kill four, injure 18 in Turkey

Four people have been killed and 18 wounded in two separate explosions in Turkey. A car bomb in Istanbul targeted security forces, while PKK militants were accused of mishandling explosives in the southeast. 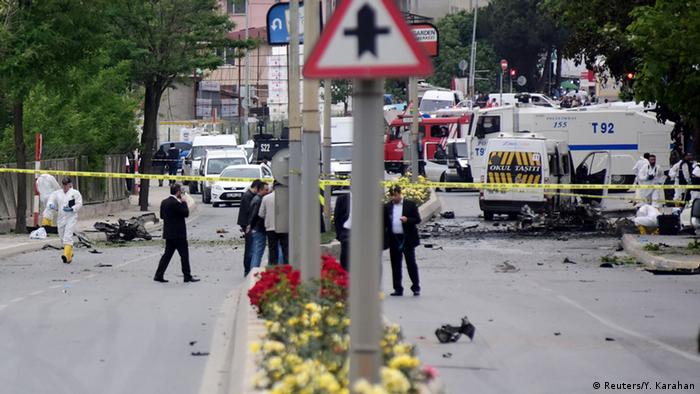 A powerful blast rocked in southeastern Turkey on Thursday, killing four people and injuring at least ten. According to the interior ministry in Ankara, a bomb went off when militants with the outlawed Kurdish Workers' Party (PKK) "loaded explosives onto a stolen truck."

"The explosives detonated prematurely," the ministry said, adding that "the injured were civilians, according to initial findings."

The four people killed were allegedly bomb-makers working in the town of Sarikamis, about 15 miles (25 km) from the city of Diyarbakir, where witnesses said the powerful explosion was heard. The PKKhas been accused of regularly carrying out bombings against Turkish security forces in the region.

The blast followed just hours after a suspected car bomb attack injured eight people in Istanbul. The bombing took place in the Sancaktepe district, and while no group has yet claimed responsibility for it, authorities suspect the attack was targeting security forces. Five of the eight people who were wounded were soldiers.

Turkey has been hit by a string of bombings over the past year, including two suicide attacks in tourist areas of Istanbul. Those bombings have been blamed on so-called "Islamic State" (IS) jihadists. Two car bombings in the capital Ankara, claimed by offshoots of the PKK, also killed dozens of people.

Turkish border forces have killed five Syrian asylum-seekers in the past two months, says Human Rights Watch. The rights group called on the Turkish government to investigate the excessive use of force by its troops. (10.05.2016)

A German peace award has been granted to the group Academics for Peace for their protest of Turkish military operations against Kurds. The Turkish government has labeled the scholars supporters of "terrorism." (09.05.2016)