Explosions at multiple fireworks workshops north of Mexico City have killed at least 24 people and injured 49 others. It is the second deadly fireworks blast in the region this year. 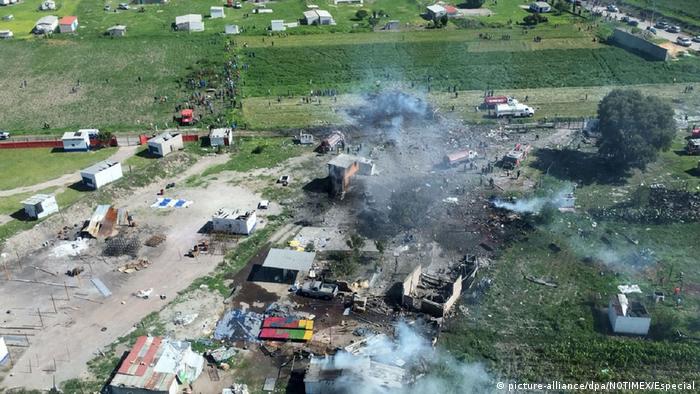 Multiple explosions at fireworks factories in Tultepec, a town north of Mexico City, claimed the lives of 24 people and injured 49 others on Thursday, officials said.

The attorney general's office for the state of Mexico, the country's most populous state, which surrounds the capital, said that 17 people had died at the blast site and seven died in the hospital.

The dead included eight Tultepec residents, four firefighters and two police officers who responded to the first blast, the state government said in a statement.

"Emergency crews attended the call at the first explosion when a second incident occurred, killing and injuring members of these groups," the statement read.

Unconfirmed videos of the incident circulated on social media.

The first explosion occurred at 9:40 in the morning local time (1440 UTC) and spread to other warehouses. Authorities said four small buildings were destroyed, and have suspended all fireworks sales in the area.

Mexican President Enrique Pena Nieto sent his condolences to the victims' families on Twitter. He said the army and the interior ministry were supporting the state rescue efforts.

Luis Felipe Puente, head of Mexico's civil defense agency, said there were four blasts in total, the first of which started at an unauthorized, clandestine warehouse and spread as flammable debris shot through the air.

Tultepec is known for making fireworks that Mexicans traditionally use to celebrate holidays. Many residents make a living selling homemade fireworks and explosions are common.

Safety measures at fireworks workshops have been a topic of debate in Mexico as authorities are unable to enforce safety regulations and regulation requirements. Regulations exist on paper, but many continue to make powerful firecrackers and bottle rockets and sell them to the public.

Hirving Lozano shocked defending World Cup champions Germany when he put Mexico ahead in the 35th minute. The goal was so momentous it seemed to cause an artificial earthquake in Mexico City. (17.06.2018)