Louis is confined to a wheelchair, Junior is gay, John is an albino. The three of them face discrimination. This feature series underlines the importance of treating people who are different with respect and tolerance. 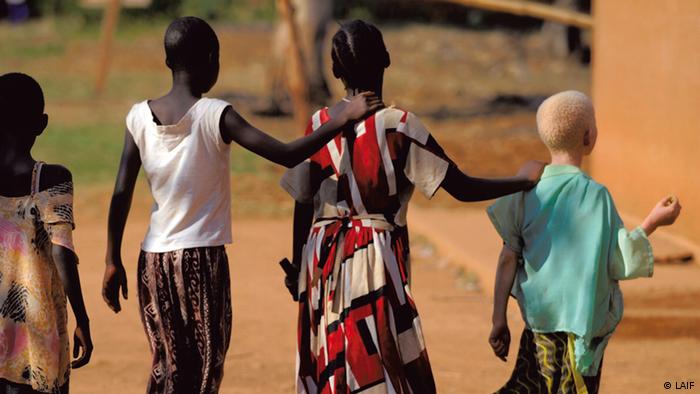 Minorities are often pushed to the margins of society. They face prejudice because they are not the same as the majority of people around them. This series shows that people who look, think or behave differently have the right to be treated in the same way as every other human being. The series also shows how many minority groups have to fight hard to gain acceptance.

One of those portrayed in the series is John, a talented singer and songwriter living in Zambia. John has written a love song which has made him famous throughout the country. The young musician is wildly beloved by his fans. These feelings of acceptance are new to him though; John is an albino and grew up in a village where he was ostracized by many people in the community. In spite of John's incredible success, other Albinos in Zambia still face discrimination and hostility.

Junior, a young homosexual man, suffered from a similar stigma. He used to live in Kinshasa but because he constantly feared for his life, he immigrated to South Africa. Even in South Africa, said to be the most gay-friendly country in all of Africa, Junior still is not tolerated everywhere…

The listeners also meet the Nigerian Lois who is confined to a wheelchair. Although she faces massive hurdles in her everyday life, Lois still finds the strength to encourage other disabled people to stand up for their rights.

In the ten episodes, members of different minorities in Africa – and even Africans living abroad – talk about their lives, share their opinions and encourage listeners to treat them with respect.

Learning by Ear - Minorities - 03 - Fighting the Stigma of HIV (Zimbabwe)

Learning by Ear - Minorities - 07 - The Pygmies (Democratic Republic of Congo)

Learning by Ear - Minorities - 03 - Fighting the Stigma of HIV (Zimbabwe).pdf

Learning by Ear - Minorities - 05 - Women in a male-dominated society (Uganda).pdf

Learning by Ear - Minorities - 07 - The Pygmies (Democratic Republic of Congo).pdf