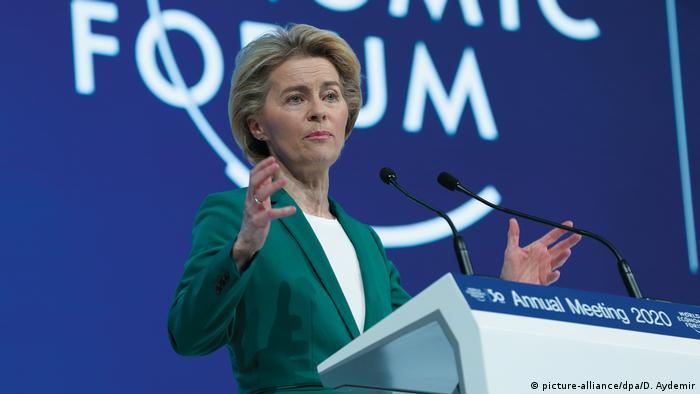 In order to respond to crises, the EU needs "credible military capabilities," the leader of the EU Commission Ursula von der Leyen said at the World Economic Forum in Davos on Wednesday.

The bloc has already "set up the building blocks of a European defense union," the former German defense minister said in her speech.

"It is complementary to NATO and it is different," she added. "There is a European way to foreign policy and foreign security policy where hard power is an important tool […] but it is never the only one."

Green deal is a 'growth strategy'

Addressing the members of the global political and economic elite at the Swiss summit, von der Leyen also focused on the economic risks of climate change.

"The World Economic Forum's so-called Global Risk Report identifies that the top five risks for our economy are all climate-related," she said, pledging that the EU would mobilize €1 trillion ($1.11 trillion) of investments from various sources to create a "green investment wave" within the decade.

"The European Green deal is our new growth strategy," von der Leyen added. "We will, for sure, be moving out of an economy based on fossil fuels, and we will be moving towards sustainable and digital economy."

She also praised China for taking "the first steps towards a CO2 pricing system."

Von der Leyen also addressed people's fears of a fast-changing world, saying it was this sentiment that fueled challenges to the current global order.

"This is not a problem of just one country, or one party, or one president," she said, in a likely reference to US leader Donald Trump.

Europe works on a 'science cloud'

The EU is co-creating a "trusted pool of non-personalized data" that businesses and government can contribute to in order to use it as a resource for innovation, she said. The European scientists are already creating the "European open science cloud" that would allow scientists to store their data and access the data created by other researchers, according to von der Leyen.

Companies and the public sector stakeholders are set to gain access to this scientific framework once the rules are made clear, ultimately followed by international players, she said.

When it comes to personal data, however, the EU Commission chief said "the protection of a person's digital dignity" was an "overriding principle." In addition to the already existing privacy frameworks, von der Leyen asked for a similar framework for artificial intelligence.

The frame would need to allow for "personal privacy, autonomy and safety" and provide guidance for international companies who want to do business in Europe.