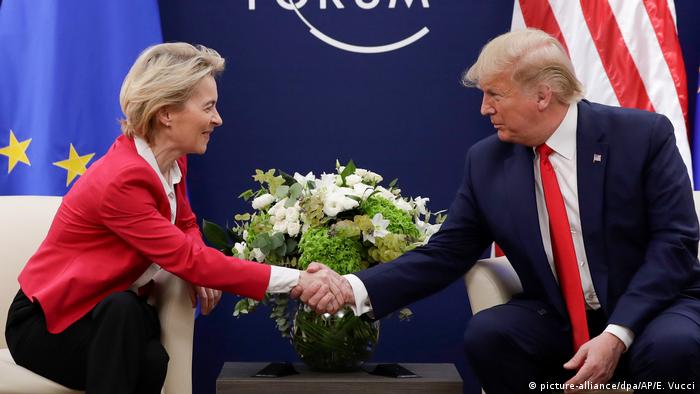 Following his first meeting Tuesday with European Commission President Ursula von der Leyen at the World Economic Forum in Davos, US President Donald Trump said that the US wants to work with the EU to close a trade deal, but warned that he would consider imposing tariffs on European car imports if the two sides can't reach an agreement.

"If we're unable to make a deal, we will have to do something, because we've been treated very badly as a country for many years on trade,'' he said. Trump added that if the Europeans were "fair" then there "wouldn't be any problems," and said he was optimistic the US could make a deal with the EU.

Von der Leyen said that the meeting was a "good opportunity to connect personally"  and that she was "looking forward to working" with President Trump.

"The American people and the European people are good friends, and this is what we're going to build on. And, indeed, we have issues to discuss — and we will negotiate," von der Leyen said.

Before their meeting on the sidelines of the World Economic Forum in Davos, Switzerland, Trump also commented on Von der Leyen's reputation as a tough negotiator, saying that was "bad news for us."

The meeting comes as the EU and the US seek to reduce bilateral trade tensions. The Trump administration has long accused the EU of having an unfair trade advantage and has threatened to impose tariffs on European cars and car parts.

However, the White House has delayed a decision on whether to impose tariffs of as much as 25% on cars and car parts from Europe and has used these threats as leverage in negotiations.

Cars and car parts are a vital export product for European industry, particularly for Germany, the eurozone's biggest economy.

Trump's threat to slap tariffs on European cars has drawn the ire of European officials and companies. EU officials are under pressure to agree to a deal as Europe's manufacturing sector slowed down in 2019, mostly due to diminished export demand for cars.