French politician Marine Le Pen and her British colleague Nigel Farage are both opponents of the European Union. They may well rally significant support in the 2014 European elections. 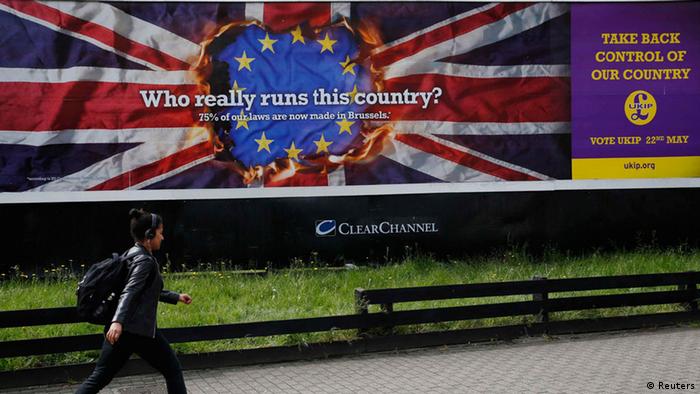 Europe's euroskeptic parties are united by their distrust of the European Union and have been strengthened by electoral successes in numerous countries. Mainstream politicans are concerned parties like Marine Le Pen's National Front in France or Nigel Farage's UKIP in Britain will bring home further victories in the European elections in May 2014.

Le Pen and Farage oppose the concentration of power in Brussels and policies they say it promotes, such as multiculturalism and mass immigration - and they are not alone. Anti-EU and populist sentiment can be observed in other European countries, such as Germany, Denmark, Greece and Italy.

In Germany, a new party, The Alternative for Germany (AfD), wants to abolish the euro and almost made it into parliament at elections in September 2013.

In Italy, the national-conservative right has been deeply ingrained within civil society since World War II. Its most visible figure is parliamentarian Alessandra Mussolini, granddaughter of the wartime dictator.

Extremist nationalist parties have also benefited from the unpopularity of the EU. In Hungary, anti-Semitism has been expressed as part of mainstream discourse, and at the same time, Greece's Golden Dawn party has established itself in the country's political landscape.

With astonishment and incomprehension, many Europeans watched as Tea Party followers paralyzed the US. Some politicans worry the European Union could soon find itself in a similar situation. (24.03.2014)

The UK Independence Party (UKIP) is gaining popularity in Britain ahead of May’s European elections, forcing the country’s mainstream parties to adapt their rhetoric on Europe and the freedom of movement. (16.05.2014)

The latest surveys indicate that the right-wing Danish People's Party is poised to do well in local elections. This could be a boost for similar parties across Europe, which aim to join forces. (19.11.2013)

Finland sees itself as Europe's star pupil. But the upstart Finns Party, with its euroskeptic party line, is polling at about 20 percent and is influencing the views of the country's more established parties. (06.05.2014)

The far-right Front National could become the strongest party in France in the European elections. The party has changed its image since Marine Le Pen took over. It’s now seen as younger and more middle-class. (20.05.2014)

EU critic and UKIP chairman, Nigel Farage, is finding fans in Germany, although the EU skeptics in the Alternative for Germany (AfD) party have ruled out collaborating with their British euroskeptic counterparts. (29.03.2014)

Germany's newest party, the euroskeptic Alternative für Deutschland, is routinely dismissed as the German Tea Party. The AfD balks at the comparison, but its "party of reason" approach is not convincing pundits. (21.05.2014)

Greek lawmakers have voted to suspend state funding for political parties accused of criminal or terrorist offenses. The measure is part of a crackdown on the country's far-right Golden Dawn party. (23.10.2013)

Hungarian Prime Minister Viktor Orban has made no secret of his critical attitude toward the EU. But the conservative politician won't dare risk an open split between Brussels and Budapest. (23.04.2014)

Italy's extreme right-wing on the rise

Italy’s right-wing extremism is deeply ingrained within civil society. Supporters are not only found in neo-Nazi groups but also in conservative clusters of the population. (09.11.2013)

Sweden's far-right: active, but not effective

Sweden's far-right scene hasn't been this active since the end of World War II, with attacks on mosques on the rise. But, on the whole, Sweden is becoming more open to other cultures. (22.05.2014)

Will a populist alliance bring down the EU?

Why French voters are turning to National Front