Euroskeptic Finns Party has ′changed the political landscape′ | Europe | News and current affairs from around the continent | DW | 06.05.2014

Finland sees itself as Europe's star pupil. But the upstart Finns Party, with its euroskeptic party line, is polling at about 20 percent and is influencing the views of the country's more established parties. 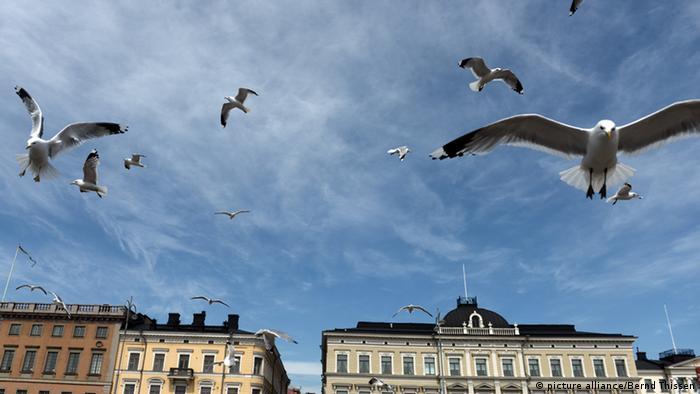 Jari Lindström is clearly proud - a little uncertain, but proud. Shy, but with a wide smile, he sits on the most prominent chair in the Finns Party (FP) hall in Helsinki's Parliament. His place is at the front of the platform, right in the middle. Since February, Lindström has been the chairman of the parliamentary group - for a simple mill worker, he has come far.

In a way, Lindström owes his political rise to Finland's Social Democratic Party. When his paper mill ran into difficulties, the works council told Lindström to turn to the Social Democrats. "But no one could help me, least of all the Social Democrats," said Lindström, still bitter. In 2006 the factory was forced to close, and 700 people lost their jobs. "That's when I decided to join the Finns Party." 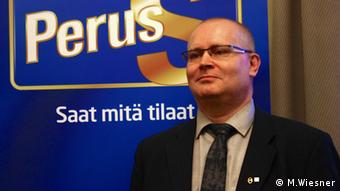 Lindström: The Finns Party is not racist

Lindström was not alone. Angry with the establishment, many voters - predominantly male, factory workers, the unemployed - turned away from established parties and gave their support to Perussuomalaiset, as the party is known in Finnish. The result: the party garnered more than 19 percent of the votes in the in 2011 parliamentary election.

In the last decades, the now disbanded Finnish Rural Party was only able to capture a few seats in parliament; today, Lindström heads a faction of 39 representatives. "We have permanently changed the political landscape," he said. "Instead of three big parties, there are now four."

The party has not only shaken up parliament's configuration, it has also introduced new topics into the national conversation. "We have made euroskepticism part of the discussion in Finland," said Lindström. "Without us, no one would be discussing the bailouts. And nobody would be discussing migration, or the conversation would be completely different."

EU rescue packages and migration - as with Europe's other euroskeptic parties, these are key issues for Perussuomalaiset. The party's strict opposition to bailouts for Greece and Portugal contributed to its electoral success in a big way. 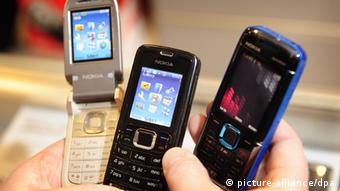 Nokia helped Finland out of its economic slump in the 1990s

Finland faced a similar economic dilemma in the mid-1990s, when the collapse of the neighboring Soviet Union meant the country lost a significant trading partner. The Finnish economy struggled, but with companies like the mobile phone giant Nokia, it was able to get back on its feet.

As with populist parties in France, Italy or Hungary, this atmosphere of resentment is a large part of the FP's approach. They have nothing against foreigners, according to Lindström. The party is just critical of immigrants. Asked to explain the racist remarks made by one party member, Lindström waved them off: His colleague just has a sense of humor that's hard to understand.

The free movement of persons, one of the key principles of the EU, is another bone of contention for the FP. To explain, Lindström gives the example of an Estonian construction worker who works in Finland, but lives with his family in Estonia. The arrangement nevertheless allows this hypothetical worker to claim social benefits in Finland, not only for himself but also for his children - illogical, according to the FP, who fear a drop in Finnish social standards as a result.

Lindström, however, admits that such cases are rare. "It's probably not a significant number, but it could become a problem," he said. "The doors are just starting to open. And that's exactly what we're worried about." 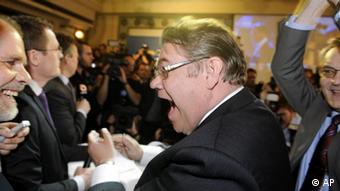 Timo Soini has been party leader since 1997

The FP has found success with views like these - sentiments that have since begun to rub off on some of the other established parties, according to Jan Sundberg, a political science professor at the University of Helsinki. He pointed out that, after losing supporters to Perussuomalaiset, the Social Democrats have shifted to a more critical course when it comes to European issues. Even the liberal Center Party and the youth organization of the conservative National Coalition Party have begun espousing views originally held only by the FP, said Sundberg.

This strategy is a response to the success of the FP, but has resulted in a further decline in the acceptance of the EU in the general population. And yet, Finland is actually a very active EU member, with many Finns considering their country as Europe's model student.

"We here in Finland follow the EU rules very closely, almost word for word," said Sundberg. This attitude, often praised in Brussels as an example for other member states to follow, has become the source of increasing frustration in Finland. Why should Finns comply with all the requirements, guidelines and limits when other member states aren't doing the same? 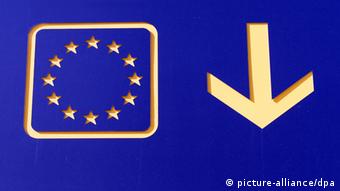 The Finns Party, and other populist movements, want less interference from the EU

Added to this frustration is the widespread impression that the EU has been interfering too much in the internal affairs of its member states. "In my opinion, the idea of the EU is getting out of hand. It's going too far, trying to harmonize and homogenize everything," said Lindström. For that reason, the FP is pushing for more Europe, but less EU: instead of Brussels overregulation, governments should instead negotiate their problems directly with each other. New laws would then only apply to the countries that are actually affected, according to the FP.

Despite all the criticism, Sundberg said that only a small minority in Finland is backing an EU exit. Even the FP would not go so far. But its euroskeptic attitude continues to strike a chord with voters. Recent polls ahead of the May European elections show that party support has remained stable, at about 20 percent. Sundberg estimated that with those numbers, the FP could increase their representation in the European Parliament to two or three seats, up from the current one.

Not enough to shake the EU to its foundations - for that, additional support is necessary. Lindström said his party will wait until after the EU election to decide which political faction to join, though he's sure of one thing: it will be euroskeptic. "But on no account racist," he insists.

Read more about the European elections in DW's special