Europeans rally against national austerity measures | Europe | News and current affairs from around the continent | DW | 29.09.2010

Rallies staged across Europe by trade unions have drawn attention to workers' dissatisfaction with proposed government austerity measures. The biggest protest was in Brussels, as thousands marched on EU institutions. 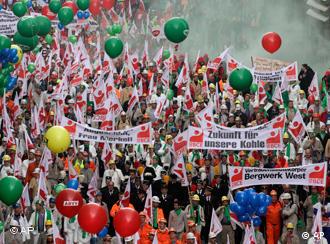 Protesters from all over Europe gathered in Brussels

A march of protest against the proposed austerity plans of many European countries was carried out on Wednesday in Brussels.

The march on European Union institutions was led by the European Trade Union Confederation (ETUC). The unions estimated that as many as 100,000 people took part in the demonstration, while police put the figure at 56,000.

Workers and union members travelled from all over Europe to be a part of the protests in Brussels, including representatives from the German Confederation of Trade Unions. In addition, as many as 1,200 German mine workers were on hand to protest against the EU's plans to close a number of mines.

Protesters held signs in many languages but all carried the common theme of the ETUC's demonstration: 'no to austerity.'

At the heart of the unions' protest are proposed plans in many European countries to rein in sovereign debt. These plans could include tax hikes, budget cuts, pension reductions, and a higher age of retirement. John Monks, general secretary of the ETUC, says the risk of the austerity measures is too high. 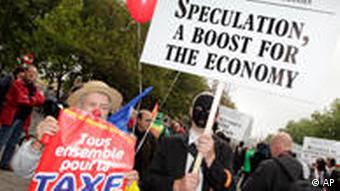 Many languages, one message: 'no to austerity'

"We do not accept that everybody, including Germany and some of the stronger economies around Germany, like the Netherlands and Austria, should be cutting at the present time," Monks said in an interview with the BBC.

He added that if strong economies are forced into austerity measures along with weaker economies, which have little choice, the ETUC is afraid that Europe will "plunge downhill."

In addition to the protest in Brussels, smaller protests took place in other European countries.

Strikes pulled public sector workers off the job in Greece and Spain, and workers' rallies took place in Poland and Portugal.

The proposed austerity measures are seen by European governments as a way to ward off future debt crises, such as the one that has seen Greece receive financial bailouts from the EU and the International Monetary Fund.

Spain's first general strike appears to have attracted more support than had initially been expected. Unions report that most workers were observing the day of action, targeted against labor reforms and budget cuts. (29.09.2010)

Protesters and police have clashed in the Greek capital, Athens, after thousands of public sector workers walked off the job in a new round of nationwide strikes. Transport, hospitals and media have all been affected. (29.06.2010)