Spain's first general strike appears to have attracted more support than had initially been expected. Unions report that most workers were observing the day of action, targeted against labor reforms and budget cuts. 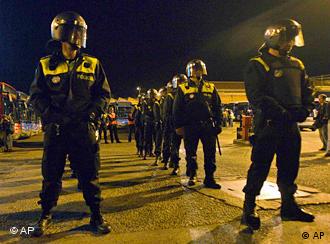 Bus depots picketed had to be guarded by police

The Spanish transport network was severely hit and picket lines formed outside factories as workers began a 24-hour-general strike against labor reforms and austerity cuts on Wednesday.

"Even considering that sectors such as education and commerce are not included we can now say with no doubt that participation is easily more than 70 percent," Cubillo said in a statement on the UGT website.

Cubillo said that more than in some sectors, such as the steel and energy industry, almost all employees had taken part. 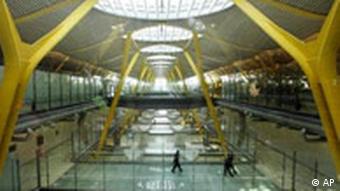 Airports were closed, with some tourists left stranded

The strike had been expected to draw only a weak response, with the cuts and reforms widely seen as inevitable.

However, the newspaper El Pais said that industry was paralyzed while transport stoppages had exacerbated the problems.

Madrid's Barajas airport and Barcelona's El Prat airport were operating at a low level, the paper said, with many tourists stranded.

Spanish Labor Minister Celestino Corbacho told a press conference that the first hours of the strike had "taken place in a normal way, without any notable incidents."

About a quarter of local train services were in operation in accordance with a minimum service agreement, Corbacho said.

Madrid's regional authorities said 75 percent of its underground trains were circulating, while union sources put the number at 20 percent.

Bus depots in the capital were picketed, while trucks were blocked from delivering produce to wholesale markets

The general strike is the first to take place for eight years after austerity plans were introduced by Prime Minister Jose Luis Rodriguez Zapatero's Socialist government.

Unions are opposed to spending cuts and labor reforms that make it easier to make employees redundant.

Amid ongoing concerns over the Spanish economy, the country's prime minister has called on opposition lawmakers to support his government's austerity and pension reforms. (14.07.2010)

In a test of the Spanish government's resolve to push forward with tough austerity measures that include cuts to civil servant pay, about three-quarters of Spain's public sector workers have gone on strike. (08.06.2010)

Spain's second round of austerity measures have narrowly passed through parliament, with economists and eurozone countries praising the move and Spanish trade unions calling for strikes. (27.05.2010)