Public sector workers in Spain strike against austerity measures | Europe| News and current affairs from around the continent | DW | 08.06.2010

In a test of the Spanish government's resolve to push forward with tough austerity measures that include cuts to civil servant pay, about three-quarters of Spain's public sector workers have gone on strike. 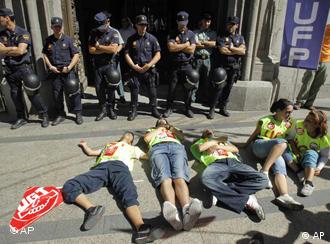 Civil servants in Spain began a one-day strike Tuesday to protest the government's plans to reduce the country's massive budget deficit by cutting their salaries.

Spain's most recent austerity package, totaling 15 billion euros ($18 billion) would give civil servants a 5-percent wage cut in 2010 and a wage freeze in 2011, the first public wage reduction in 30 years.

Unions are typically close to Zapatero's Socialist Party, which has been losing popularity amid gloomy economic forecasts and 20 percent unemployment, the eurozone's highest. Zapatero's government has been losing popularity

Tuesday's strike is a potential preview of a full-fledged general strike that unions are threatening if government plans to enact labor market reform curtail workers' rights.

Unions, employers and government officials have been negotiating what the reform might entail for months. UGT union confederation leader Candido Mendez has called the discussions "difficult." The government says it will enact the reforms by decree if it cannot reach an agreement through negotiations.

The reform would loosen restrictions on severance pay for permanent workers, who have become prohibitively expensive to lay off. These conditions have created a two-tier labor market where about a quarter of workers are left with temporary contracts that provide few rights.

Most economists agree that reforming the labor market - together with restructuring banks and reducing the deficit - is necessary to remedy Spain's chronic economic problems.

Ratings agency Fitch cut Spain's credit rating due to weak growth prospects, dealing a blow to efforts to rein in spending and ease fears of a Greek-style crisis. US stocks slid and the euro weakened on the news. (29.05.2010)

Spain's second round of austerity measures have narrowly passed through parliament, with economists and eurozone countries praising the move and Spanish trade unions calling for strikes. (27.05.2010)

Unions representing Spain's civil servants are threatening to expand a strike to protest proposed five-percent pay cuts and freezes on pensions and wages. (21.05.2010)