European lawmakers have voted to waive the immunity of the former Catalan leader along with two other separatists MEPs. The move could pave the way for their extradition. 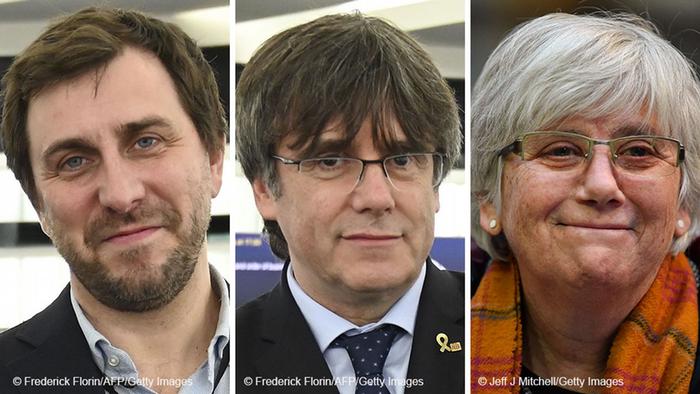 MEPs (from left) Toni Comin, Carles Puigdemont and Clara Ponsati have been stripped of parliamentary immunity

The European Parliament voted on Tuesday in favor of lifting immunity from the former leader of Spain's Catalonia region, Carles Puigdemont.

The trio fled to Belgium in October 2017 along with other Catalan separatists. They are wanted by Spain after holding an independence referendum that the Spanish government said was illegal.

In 2019, Puigdemont, Comin and Ponsati won seats in the European Parliament. This gave them protection in their positions as members of the EU assembly.

But at the request of the Spanish judiciary, the parliament opened an inquiry into waiving their immunity. The parliament's Legal Affairs Committee voted last month to recommend the move.

In the decision on Puigdemont, 400 legislators voted for the waiver of immunity, 248 were against and 45 abstained.

The motions against Comin and Ponsati were adopted by 404 votes to 247, the parliament said.

The vote sends "a message that the problems of Catalonia are to be resolved within Spain and not at a European level," Spanish Foreign Minister Arancha Gonzalez Laya told reporters in a statement.

The three MEPs have already announced that they will take the case to the EU's highest court, the European Court of Justice.