The deal will cut 99 percent of tariffs between the two sides but opponents say it gives corporations too much power over domestic regulation. Several hundred people protested in Strasbourg outside parliament.

The European Union Parliament approved on Wednesday a hotly contested free trade deal with Canada after seven years of negotiations.

Lawmakers backed the Comprehensive Economic and Trade Agreement (CETA) 408 votes to 254, meaning large parts of the deal can enter into force as soon as next month.

Proponents of the deal say it will create jobs and reduce the cost of food and consumer goods for ordinary people. But opponents fear that the current standard of consumer goods could deteriorate.

Police reported 700 people protested outside the parliament building in Strasbourg arguing the deal would erode environmental, labor and consumer standards.Demonstrators dressed in white suits lay down to form a human chain which had to be stepped over to reach the parliament building. "To say yes to CETA is to trample the people," read one banner. 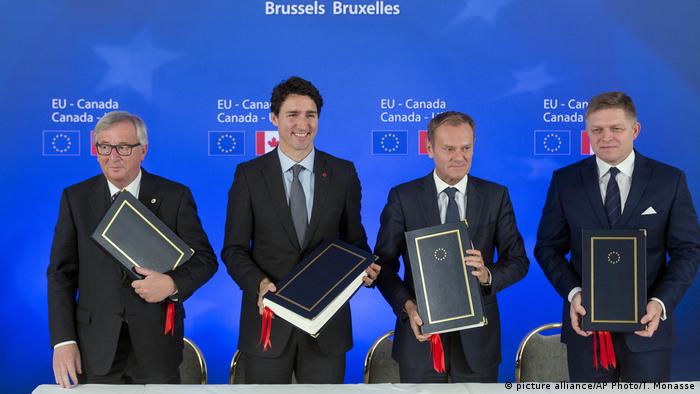 CETA will remove 99 percent of customs duties between the two sides, benefiting European exporters. In 2016 the EU exported 37 billion euros (US$39 billion) of goods and services and imported 30 billion euros from the North American nation, according to Statistics Canada. A joint EU-Canada study forecast the deal would increase bilateral trade in goods and services by more than 20 percent.

The agreement also attempts to harmonize regulations on matters such as health and the environment.

Parts of the deal, particularly concerning investment, will only come into force after clearance by more than 30 European parliaments and the assemblies of Belgium's regions.

EU Commission President Jean-Claude Juncker called it "an important milestone" and said "EU companies and citizens will start to reap the benefits the agreement offers as soon as possible."

EU Trade Commissioner Cecilia Malmstroem said during the debate that EU citizens as well as businesses would benefit from the trade deal.

"CETA cuts red tape and removes almost all tariffs from day one; exporters stand to save over 500 million euros (US$528 million)," Malmstroem told parliamentarians.

Ahead of the debate Malmstrom had tried to assuage concerns that the deal would cut into the independence of EU decision-making.

The deal would "not change food safety standards or any other EU requirements, only the EU institutions can do that," she said.

The deal includes a proposal to set up special courts to settle disputes between investors and national authorities. Opponents argued this provision hands too much power to multinationals and undermines national regulation.

"Multinationals will be able to attack governments in a privatized court system," said France's far-right presidential candidate and MEP Marine Le Pen, who said she would vote against CETA.

"If a new trade deal has to be created, we would like environmental rights or labor rights to be enforceable by this deal as well. Foreign companies still have this exclusive right to tackle regulations from the domestic governments via the ISDS (Investor-state dispute settlement) system. It's an exclusive right," Helga Reimund, from the anti-globalization group Attac told Deutsche Welle.

"If a company harms label rights then their workers or their unions don't have the possibility to sue via the ISDS system," Reimund said.

Germany's Manfred Weber, chairman of the European People's Party, the largest party in the Parliament, welcomed what he called an "excellent agreement."

"We Europeans want to send a very clear message: we do not want to build walls but bridges," he said, over the shouts of some of his colleagues.

The Greens, the far left, the far right and some Socialists voted against the deal.

The EU and Canada formally signed the deal in October after seven years of negotiation. EU leaders hoped the vote would show confidence in a trade system threatened by US President Donald Trump's disdain for big international trade deals.

Three of the four major groups in the EU parliament backed the agreement - the EPP Christian Democrats, the ECR Conservatives and the ALDE liberals. The far-right and far-left and a large part of the socialist S&D group opposed it.

The war in Ukraine has been raging for six months. It has also changed Germany — shattering conventions and forcing politicians to impose new measures.

A small Czech village is at the heart of the global vinyl record revival 15.09.2022

Having steered through communism and revolution to lead the global comeback of the vinyl record, Czechia’s GZ Media is now confronting pandemic, populism, and war, as Tim Gosling reports from Lodenice.