David-Maria Sassoli, a center-left Italian lawmaker, was elected as the new president of the European Parliament. The vote came amid tensions over other nominations to the EU's top jobs, which are still pending approval. 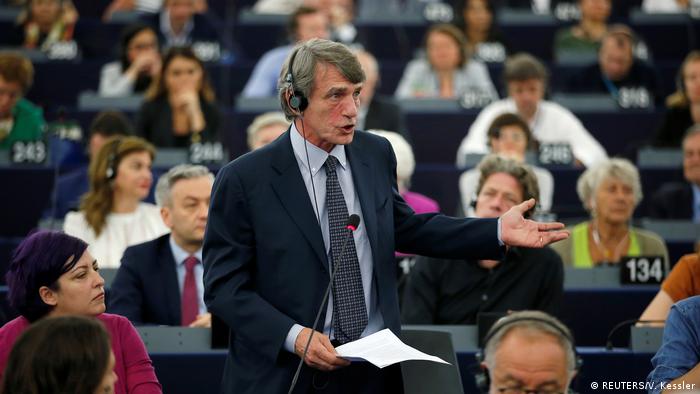 The European Parliament filled its top EU post on Wednesday, with lawmakers electing Italy's David-Maria Sassoli as the new president of the assembly.

Sassoli, a lawmaker with the center-left Socialists and Democrats bloc (S&D) secured an absolute majority with 345 votes in the second round of voting.

Newly-elected MEPs, who had their inaugural session on Tuesday, voted in a secret ballot to select the new president who will serve a two-and-a-half year term.

The vote comes on the heels of a difficult agreement reached by the EU's 28 national leaders on filling the bloc's top jobs that saw German Defense Minister Ursula von der Leyen nominated as the next European Commission president, even though she was not a lead candidate picked by one of the blocs in Parliament.

Many EU lawmakers criticized the leaders' nominations, but ended up following their recommendation in the vote on Wednesday.

The EPP currently has the largest number of seats in Parliament, followed by the S&D — but both parties lost support in the European Parliament elections in May.

Italy's Sassoli was favored to win, after the S&D lawmaker got the backing of the center-right EPP as well as the liberals.

Von der Leyen is expected to travel to the French city of Strasbourg, where the European Parliament sits, on Wednesday afternoon to attend the session, and likely try to win support for her nomination as the head of the EU's executive arm.

MEPs will have the final say in the EU's top four jobs, as all nominees must be confirmed by the European Parliament. That vote has not been set yet, but is expected to occur in mid-July.

Christine Lagarde nominated to be the ECB's first female chief

IMF Managing Director Christine Lagarde is on course to become the European Central Bank's next president in November. If she replaces Italy's Mario Draghi, a huge change in the eurozone lender's policy seems unlikely. (02.07.2019)