Europe's human rights court has ruled partly against Ukraine on the jailing of Yulia Tymoshenko. Her imprisonment has strained the former Soviet state's ties with the European Union and the United States. 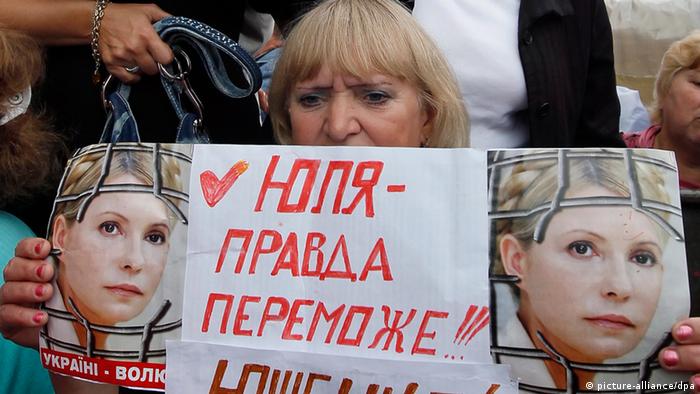 The court ruled unanimously that Ukraine had violated sections of the European Convention on Human Rights relating to liberty and security, speedy review of the lawfulness of detention, right to compensation for unlawful detention, and a limitation on restricting rights. A majority also ruled that Ukraine had not violated a prohibition on inhuman or degrading treatment or punishment as Tymoshenko had alleged.

"The court held in particular: that Ms. Tymoshenko's pretrial detention had been arbitrary; that the lawfulness of her detention had not been properly reviewed; and that she had no possibility to seek compensation for her unlawful deprivation of liberty," according to a press release. "The court also found that, given that the judge had referred to her alleged hindering of the proceedings and contemptious behavior, her right to liberty had been restricted for other reasons than those permissible under Article 5."

The court stressed in its ruling that Tuesday's verdict was not final. Under articles 43 and 44 of the ECHR convention, any such lower chamber ruling can be appealed - by either side - at the Grand Chamber of the ECHR in Strasbourg.

Tymoshenko had accused Ukraine's government of rigging the case against her and holding her in inhumane conditions. Lawyers for the state had called the allegations groundless.

In 2011, a court in Ukraine sentenced Tymoshenko, an architect of the 2004 pro-democracy Orange Revolution, to seven years in prison after convicting her of exceeding her powers as prime minster while negotiating a gas contract with Russia.

Tymoshenko twice served as prime minister of Ukraine, both times in an uneasy alliance with political rival President Viktor Yanukovich, most recently from December 2007 to March 2010.