European countries to attend Nobel awards despite Chinese threats | Europe | News and current affairs from around the continent | DW | 05.11.2010

China is putting pressure on European embassies in Oslo to keep their envoys away from the Nobel awards ceremony where jailed democracy activist Liu Xiaobo will be honored. But diplomats are resisting the demands. European embassies in Norwegian capital Oslo have received calls from their Chinese counterpart to shun the Nobel awards ceremony in December. Chinese dissident Liu Xiaobo, who is serving an 11-year jail term on subversion charges for advocating democracy and multi-party rule, will be honored at the event.

China's embassy in Oslo sent out letters explicitly warning EU envoys against showing up at the ceremony on December 10, telling them to refrain from "activities aimed against China."

"We attend as we do every year"

"We had an exchange between European embassies in Oslo regarding the note," Jan Friedrich, deputy chief of Germany's embassy in Oslo said. "Our position is clear, we will attend as we do every year." 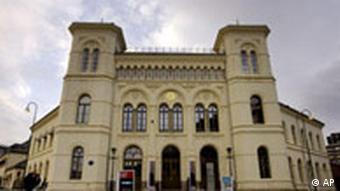 Friedrich said he is going to attend the ceremony in place of the German ambassador, who will be on a trip at the time.

Olof Huldtgren, deputy head at the Swedish embassy in Oslo said that the letter "does not explicitly say don't participate in the Nobel ceremony, but reading between the lines, the message is clear."

"They will have to bear the consequences"

After the warnings were sent, Chinese deputy foreign minister Cui Tiankai made a statement to sure the message had been understood.

"If they make the wrong choice, they will have to bear the consequences," Cui added.

A senior European diplomat in Oslo who asked not to named said that most EU states will implement a "business as usual" strategy, meaning that those ambassadors who usually attend the Nobel awards will also do so this year.

Britain, Sweden, Finland, Denmark, Netherlands and Iceland have also said they would attend the award ceremony. So far, only China has turned down the invitation.

The 2010 Nobel Peace Prize has been controversially awarded to jailed Chinese dissident Liu Xiaobo in a move which Beijing says could damage relations between China and Norway. (08.10.2010)

With this year's awarding of the Nobel Peace Prize to Liu Xiaobo it is the first time a Chinese citizen has received the award. The pro-democracy activist, who co-organized "Charter 08" has been in jail since 2008. (08.10.2010)

Liu Xiaobo gets 11 years in jail

A court in China sentenced leading dissident Liu Xiaobo to 11 years in prison on Friday. The 53 year old was tried for subversion earlier this week. (25.12.2009)